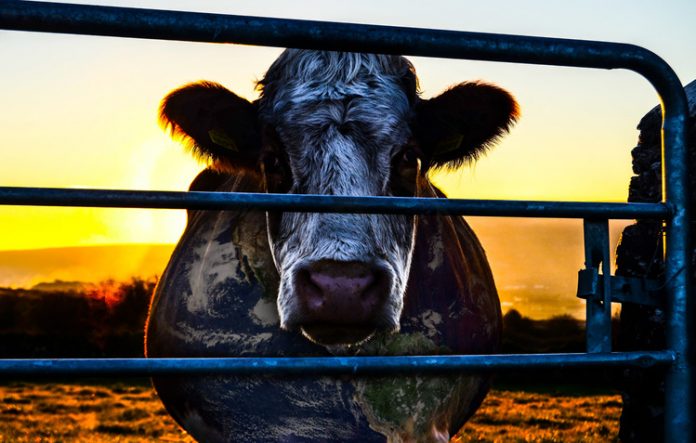 I have been a self-proclaimed environmentalist for 12 years now. In a country like India, it is a very painful stand to take as you end up watching helplessly a whole lot of environmental destruction on a daily basis.

Still, I believed that playing my part in not harming the environment through small behavioral changes like, proper plastic disposal, switching over to LED bulbs, carpooling and caring about animals has had significant impact in reducing my personal carbon footprints polluting mother Earth.

Driven early my idol, Al Gore (The Inconvenient Truth), I was sure that people can be inspired to change and adopt a nature-loving lifestyle provided they are educated properly by means of social awareness and through governmental policies. 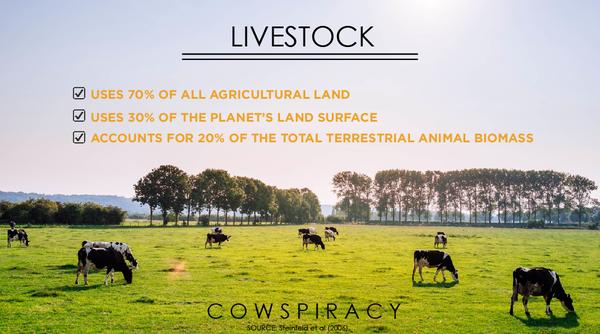 Although, the facts and data provided in the film looks unreal in the beginning, but the response from the top environmental organisations establish the fact that they are on the right track.

The foundation of this documentary revolves around a report published by the UN News Center that exposed the reality of animal agriculture, specifically cow/ cattle farming. It is the biggest cause of global warming and environmental destruction.

Cows and other livestock, through their complex digestive system, produce a large amount of Methane (CH4) gas which is 86 times more dangerous for the atmosphere than Carbon dioxide (CO2).  Al Gore’s famous CO2 chart in the Inconvenient Truth established CO2 not methane emissions as the main target of reduction to save the planet. Kip claims that 51% of the total greenhouse gases are produced by animal agriculture ie. slaughterhouses, fishing industry and dairy farms to begin with. It is far more than that of the entire transportation sector (13%) which is the traditional focus of the environmental watch groups. Kip exposed that there is nothing “environmental” about these organisations. That they have been bribed and bought by the food industry to keep their secret safe.

Personally I feel that there is a great need to redefine the moniker, ‘environmentalist’. I believe that any kind of non-vegetarian diet tantamounts to animal cruelty and as environmentalists we should put our weight behind stopping this violence.

But, in the documentary, an elderly expert settles the debate saying. “You cant eat meat and call yourself an environmentalist. Period.”

Not only is animal agriculture the main cause of global warming but, it is also a leading cause of resource consumption. 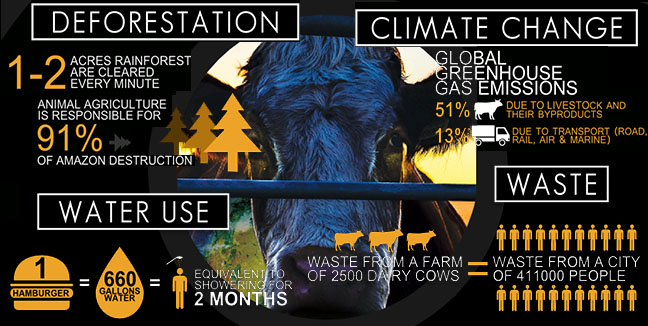 For instance, water consumption of the livestock and cattle industry is astonishing. Another eye-opener was the comparison between water consumed in showering Vs putting one hamburger on a plate. The burger uses 660 gallons of water to reach you. This is equivalent to two months worth of showering water for a normal human. Kip emphasized the craziness of the situation by taking quick showers to save water.

The meat and dairy industry is taking up 1/3 rd of the world’s fresh water resources! Next time you eat a non-vegetarian meal, you should be feeling guilty for encouraging such an industry, and if you think there is no such thing, the day of crisis will come sooner than you expect, be assured and look away. 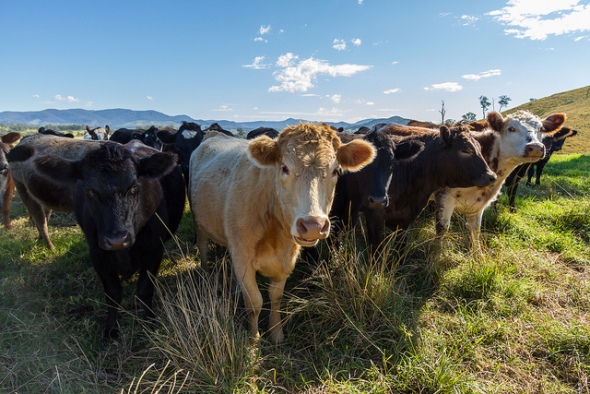 Next, waste production and mis-management. Cows and livestock have huge digestive systems and produce a lot of excreta, which ends up being a breeding ground for flies that corrupt your food and so on…

Waste from a farm of 2500 cows is equivalent to waste from a city of 411,000  humans. Yes that’s pretty shitty Math. Another fact Kip provides exclusively for the US was that every minute 7 million pounds of excrement is produced by the animals used for food in the US alone!

To make way for pasture and grazing grounds, deforestation is happening at an alarming rate. Around 1-2 acres of rain forests are cleared every second in the world to make way for human consumption.

The problem is not the cow, it is the overpopulation of cows that are bred for production of meat or dairy products which in turn takes forest space and creates huge amount of pollution. Nearly 1/3rd of the Earth’s land has turned to desert due to deforestation to feed the livestock industry. Around 91% of the Amazon Rain forest has been lost to animal agriculture. 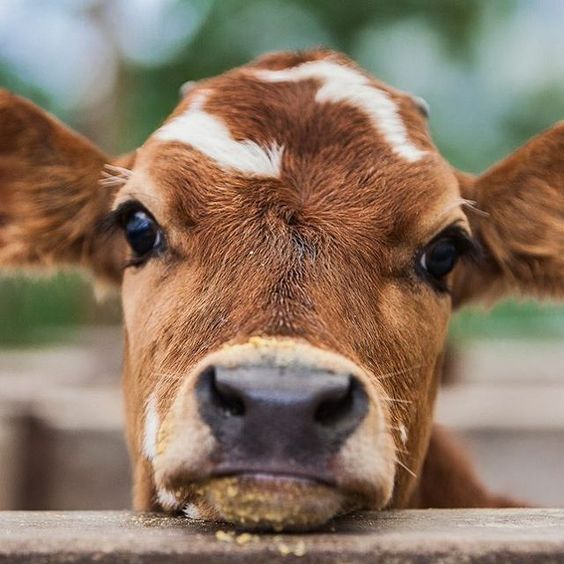 Livestock covers are taking 45% of earth’s available land as of now and the numbers are increasing. While on one hand, a plant-based diet is much healthier yet, it is almost insignificant to the meat-based diet in terms of land use. About 1.5 acres of land will give you 37,000 lbs of vegetarian food as compared to the 375 lbs of meat that will be produced in the same area. Land needed to feed a meat-eating person for an year is 18 times bigger than that of a vegan! 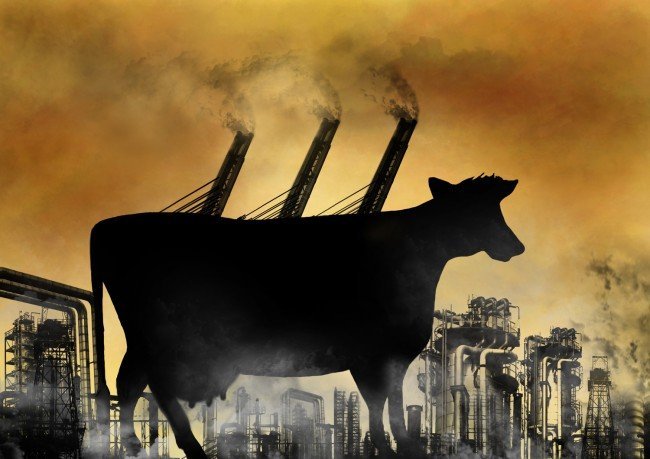 “What to eat?” would be the most important choice you make to save the green cover that gives you the oxygen to breathe.

Let’s focus on the oceans for a bit. The oceans are dying and the earth will die with it claims innumerable environmentalists. Who is killing the oceans? Humans, of course. Due to our ingenious ways of fishing, we kill five pounds of unintended marine species for every one pound of edible fish. Huge nets are used by fishing vessels and ships that entrap fishes and other marine species as they travel, then they sort them out and kill what is not edible! 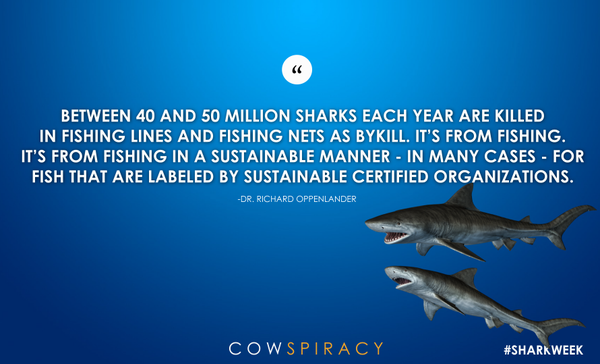 Another instance of animal agriculture which is the leading cause for species extinction, ocean dead zones, water pollution and habitat destruction. How is it affecting other species? About 110 species of animals and insects are lost every day due to rain forest destruction. 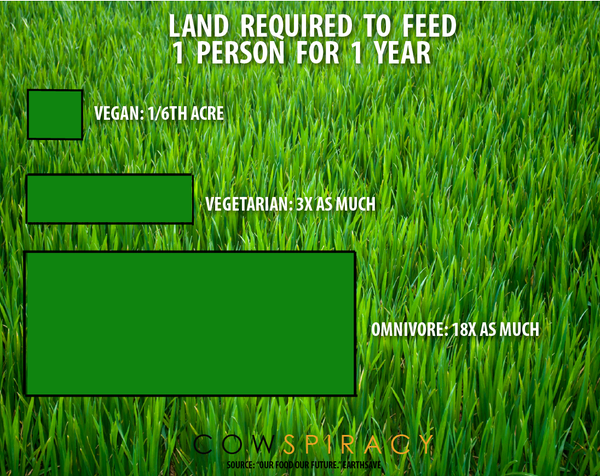 When in India, so much is being said and done in the name of cow protection and beef-ban, we should at least do it for the right reasons. But, I do not want to elaborate on this because for me it is an environmental not political issue and I would like it to remain that way.

Solution: Be vegan and encourage others to do the same. This is the new mantra of a True Environmentalist.

Please visit www.cowspiracy.com and support Kip Anderson and Keegan Kuhn in their fight against the worst form of Animal cruelty i.e. animal agriculture and I rest my case with a trailer from the flick “Cowspiracy: The Sustainability Secret with an appeal to share as much as possible.