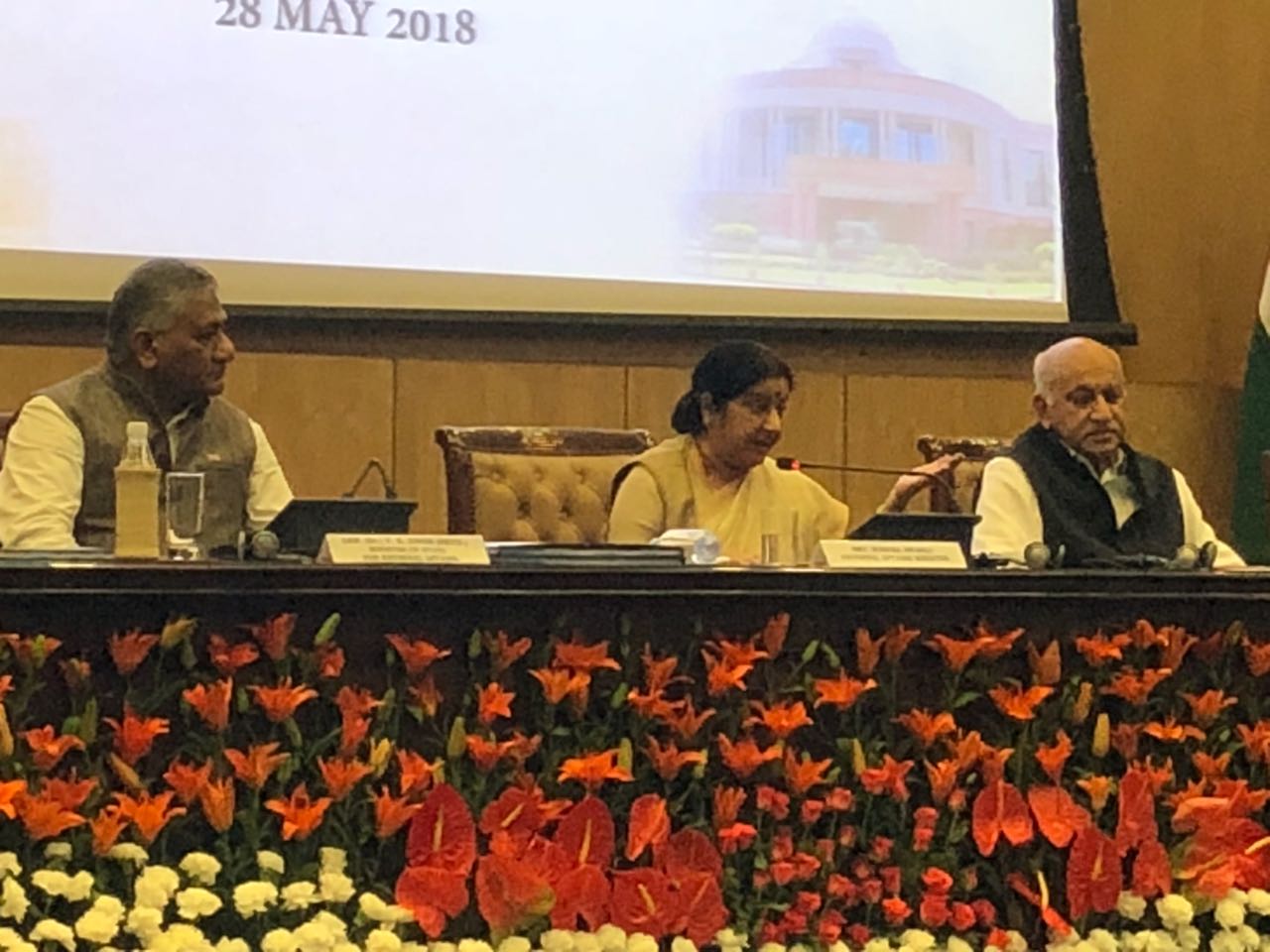 Foreign Affairs Minister, Sushma Swaraj, on Monday gave an update on India’s diplomatic relations with countries across world. “Last four years (since BJP has been in power) have been characterised by unprecedented outreach with unparalleled outcomes,” she said, adding that the aim when she took over as the top diplomat, was to have ministerial level talks with all 192 UN member countries. The government has covered 186 countries already.

The highlights are given below:

Responding to the question on H1B visa she said “We got the spouse visas from the US and now we are making all out efforts to save these visas, we are talking to White House, Congress and Senators we are trying hard to save these visas.”

On holding talks with Pakistan she said “We never said we are not ready for talks, but there is a caveat. Terror and talks cannot go together, be it post elections(Pakistan general elections scheduled for July 25) or even before. Jab seema par janaze uth rahe hon,to baatcheet ki awaaz acchi nahi lagti.”

Gilgit Baltistan: “The answer we got in response of what happened with Gilgit Baltistan Order 2018 was laughable. They tried to teach us history. Pakistan always distorts history and doesn’t believe in law. Only thing thing I felt while reading their answer was, look who’s talking.”

Informal summit between Prime Minister Mode and Xi Jinping – “We had to set the rules for informal talks between the two premiers. We decided not to give them topics. There were three main focus areas – ease of building a relationship, talks on global issues and understanding each others views on these and increasing mutual understanding. The talks were successful on all three fronts. In case of an issue, the two leaders have now decided they will pick the phone and talk to each other.”

Mansarovar – The reports on pilgrims being restricted from going to Mansarovar are not true. As there is a designated place for holy dip, people are allowed to take a dip there only, but there is not restiction.

Doklam – “I am repeating again, there is no change in the situation at the Doklam faceoff site. Status quo is continuing.” The leaders of the two countries have given a strategic guideline, she said so that if the army (from either side) crosses over, it should not lead to any misunderstanding.

4) Whether India will import oil from Iran “We will abide by UN sanctions not country specific sanctions.”

Kidnapped engineers – When asked about the status of seven engineers, who were kidnapped from a power plant in north Afghanistan earlier this month, she said that the Afghan government told her “they (Indian engineers) came to our country to help us and we will not let any harm come to them.” However, when Swaraj didn’t hear from them for 5-6 days, she wrote a letter, and also asked the Indian ambassador to meet President Ghani, who in turn reiterated that they are working to get the Indians back.

Swaraj is in talks with the company everyday. However, as secrecy is the hallmark of such operations she declined to say more.

Combined Indo-China projects: When India and china build infrastructure in Afghanistan it is faster and work is finished in half the time. India is committed to finishing 116 small projects in 31 provinces in the country.

6) Responding to a question from NewsMobile Editor in Chief Saurabh Shukla, on North Korea, Swaraj said

Answer: “Our success with Pakistan we have isolated Pakistan and built global pressure. Now it is willing to talk.”

Accusation: BJP has distanced from Russia

Answer: “If President Putin calls PM Modi for an informal summit, which he attends despite a busy schedule and returns 24 hours, is it distancing?”

“They have an obsession with Doklam. There is no face-off, we have solved it via dialogue and diplomacy.”

Answer: Twitter has connected the common man to the foreign ministry, which was once considered elitist. “My ambassadors work 24/7. I don’t sleep and don’t let my Ambassadors sleep.”

8) Effectiveness of the United Nations: “I agree that the UN, specially security council, is non-influential. Reforms are needed in the UN and should be started from the secutiry council.”

“In the last 4 years, we have had unprecedented engagement with Latin America. We consider UN sanctions not country specific sanctions.” She was referring to US sanctions against Venezuela.

She also said that since the Reserve Bank of India has disallowed cryptocurrency India will never trade in it.

10) Vijay Mallya extradition: “We have sent out Mallya’s extradition request. One of the cases in the court is by the State Bank of India (SBI) consortium, which involves 12 banks. They have won the case and the money can now be recovered.”

“Prime Minister Modi told British Prime Minister Theresa May that UK courts asking about the condition of Indian jails is not right, as these are the same prisons where they had jailed our leaders like Gandhi and Nehru, when he met in London in April, during the meeting of Commonwealth Heads of Government Meeting (CHOGM) and discussed Mallya’s extradition.”