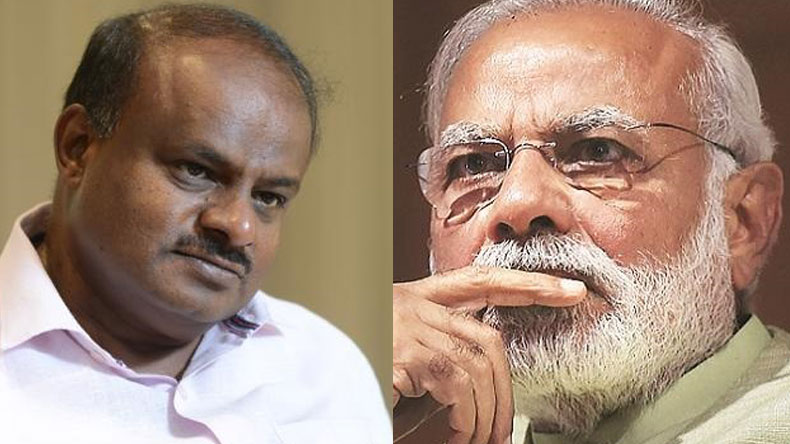 HD Kumaraswamy, who courted controversy on Sunday by saying that he became the chief minister due to the support of the Congress party and not because of the people’s mandate, will meet the prime minister on Monday.

In an interaction with the media on Sunday, Kumaraswamy said he had asked for a clear mandate from the people of Karnataka, but was now indebted to the Congress leaders. The Kumaraswamy-led government is an alliance between his party, JD(S), the Congress party and independent candidates.

“It is not my independent government. I asked the people of Karnataka for a clear mandate to do their bidding. But now, I am here indebted to the Congress leaders. I am not here because of mandate from state’s 6 crore population,” Kumaraswamy said.

Kumaraswamy will be in the national capital to meet Prime Minister Narendra Modi today. This will be his first meeting with Modi after taking over as the chief minister of the JDS-Congress coalition government in Karnataka. He will also visit Raj Ghat in the afternoon to pay tribute to Father of the Nation Mahatma Gandhi.

After returning to Bengaluru, Kumaraswamy is expected to expand his cabinet. A bilateral discussion is going on between the Congress and the JD-S which will be finalised within one or two days, the Congress’ Karnataka in-charge KC Venugopal told ANI.

“It will be sorted out within one or two days. After finalisation of the portfolio, immediately we will go for expansion,” Venugopal said.

When asked about party president Rahul Gandhi’s absence from India, Venugopal said it would not affect the cabinet expansion much as he is continuously available over the phone.