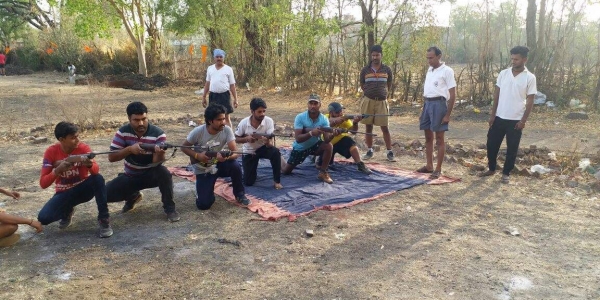 Bajrang Dal had allegedly organized an arms training camp this month, in Bawara of Rajgarh district of Madhya Pradesh (MP) where its workers were secretly trained to use arms and other weapons allegedly to ‘protect Hindus’.

Apparently, the camp was organised between May 3 to 11. Selected members from 32 districts were trained to use rifles, swords and lathis or batons to allegedly ‘tackle anti-national, love jihad elements.’

It is believed that once admitted, the Bajrangis were not allowed to leave the camp no matter what. The party took care of their facilities between 4 am till 11 pm.

The camp came to light when some photographs of the training session got leaked into the social media.

The Bajrang Dal District Convenor, Devi Singh Sondhia said, “This is a routine camp which we organize annually to tackle anti-national, love jihad elements. It started in the year 1984.”

Meanwhile, the Bharatiya Janata Party (BJP) said that no one will be allowed to take law in their hands.

The MP BJP spokesman, Rajneesh Agrawal said, “There is a rule of law and Constitution in the country and in this case, no one will be allowed to take over the law. Appropriate action will be taken by the government.”

The Congress also took this violation very seriosly and asked the government to take immediate action against it.

Congress spokesman Pankaj Chaturvedi said, “Such a lawlessness should not be allowed. Do the people taking this training have no faith in our armed forces? The Government should take immediate action.”