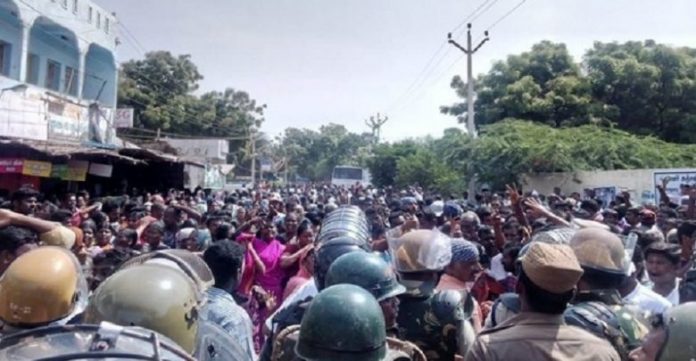 The coastal town of Thoothukudi, or Tuticorin, in Tamil Nadu has been in the news and trending on the social media because police opened fire on protesters even as politicians pass the buck.

What happened in Tuticorin?

On Tuesday protesters seeking to shut down Sterlite’s copper smelter clashed with the police and the ensuing firing killed 10. Two more people died on Wednesday taking the toll to 13 people. Over 60 have been injured.

They were protesting against the expansion the smelter, owned by Vedanta group. Residents and environmental activists say emissions from the plant, India’s second biggest, are polluting the air and water, affecting people’s health.

Protests against Vedanta’s Sterlite Copper have been going on for more than 100 days and the plant has been shut for more than 50 days. It started when the company announced its plans to invest Rs 2500 crore in doubling the capacity of its existing facility to 800,000 tonnes per annum. Several cases have been filed against the plant since it started in 1996, and the company was fined about $18 million for breaking environmental laws.

1) State government taking steps shut down the plant: Three days after violence erupted, Tamil Nadu Chief Minister K. Palaniswami,  said that his government was taking all steps to close the plant via legal route. Earlier in the day, he blamed opposition parties, NGOs and anti-social elements for the killings in anti-Sterlite protests. All protesters arrested have been released.

2) The Ministry of Home Affairs, earlier in the day, took cognisance of the situation and has sought a report from the Tamil Nadu government.

3) Pollution control board said that the plant will remain closed till at least June 6 as the facility is not complying with environmental rules. Electricity supply to the smelter has been disconnected.

DMK, allies call dawn-to-dusk bandh on May 25: The DMK on Wednesday called for a dawn-to-dusk bandh in Tamil Nadu on May 25. According to a statement issued by the DMK, the All India National Congress, the Dravidar Kazhagam, the Marumalarchi Dravida Munnetra Kazhagam, the CPI, the CPI(M), the Indian Union Muslim League, the Viduthalai Chiruthaigal Katchi and the Manithaneya Makkal Katchi will also take part in the protest.

6) Plea to direct NHRC to conduct enquiry filed in Delhi HC, likely to be heard on Friday.

8) The court directed the state government to preserve the bodies of those killed in police firing on May 22, until further orders

9) Vedanta said in a statement it regretted the incidents and was working with authorities to ensure the safety of its employees, facilities and the surrounding community and will wait for the direction from government and court to start operations.

10) Charges filed against Kamal Haasan, Vaiko and MK Stalin as they visited the city when section 144 was imposed.
ShareTweetGoogleWhatsappPrint
Mail