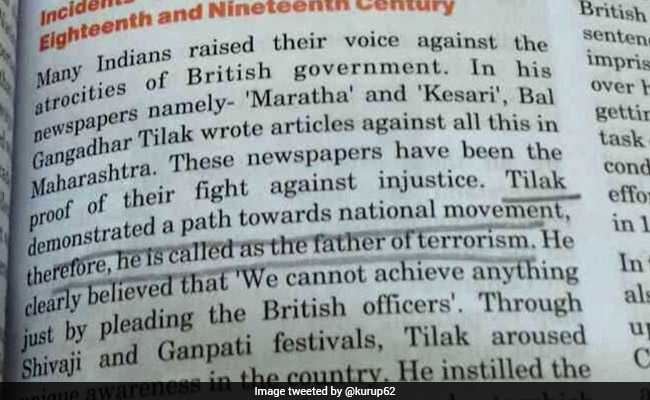 With history being rewritten extensively across the world to match political rhetoric, this was bound to happen sooner or later. Controversy and history text books are a match made in hell. Some years back, NCERT history books were in news for calling Bhagat Singh a terrorist and now, a reference book for Class 8 Social Studies has described freedom fighter Bal Gangadhar Tilak as the ‘father of terrorism’.

Released by a Mathura-based publisher, this book is being used by private English-medium schools affiliated to the Rajasthan Board of Secondary Education (RBSE).

“Tilak demonstrated a path towards national movement, therefore, he is called as the father of terrorism.” reads page 267 of chapter 22 of the book.

Tilak’s description is part of sub-topic “Incidents of National Movement during the 18th and 19th century”.

“Tilak clearly believed that we cannot achieve anything just by pleading the British officers. Through Shivaji and Ganpati festivals, Tilak aroused unique awareness in the country. He instilled the mantra of freedom among the masses, due to which he became a thorn in the eyes of the British,” the book further reads.

Reacting to this, Private School Association Director, Kailash Sharma said, “Describing Tilak as the “father of terrorism” is highly condemnable. Before writing or making such controversial changes in texts, one should consult with the historians first.”