Made in Italy, robotic hands are cheaper and lighter | Newsmobile
Monday, June 27, 2022

Home Home Slider Made in Italy, robotic hands are cheaper and lighter 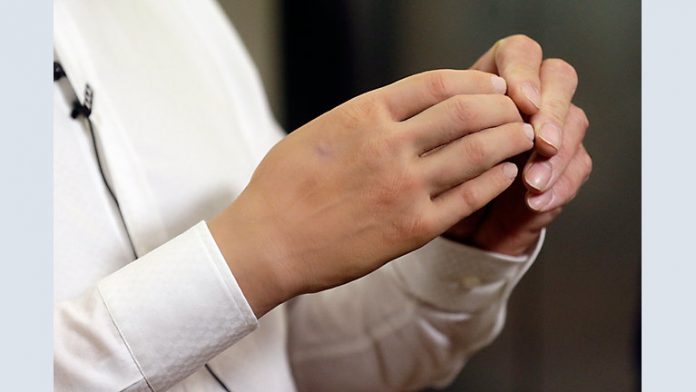 Italian researchers have unveiled a new robotic hand which also allows users to grip objects more naturally and features a design that will lower the price significantly.

The robotic hand has a simpler mechanical design compared with other such myoelectric prosthetics, characterized by sensors that react to electrical signals from the brain to the muscles, said researcher Lorenzo De Michieli. He helped develop the hand in a lab backed by the Italian Institute of Technology and the INAIL state workers’ compensation prosthetic center, said media reports.

The hand has only one motor that controls all five fingers, making it lighter, cheaper and more able to adapt to the shape of objects. It weighs approximately the same as a human hand.

It is expected to go to market in Europe next year with a target price of around 10,000 euros ($11,900), about 30 percent below current market prices.

A video of the amputee testing the robotic hand shows him doing a variety of tasks, including removing bills from an automated teller machine, grasping a pencil and driving a stick-shift car.

About twelve laboratories are working on improving the myoelectric prosthetic, with some focusing on touch, others on improving how the nervous system communicates with the prosthetic.

It does have the limitations of inability to control individual fingers for tasks like playing the piano or typing on a computer.