Home Home Slider More than 60 MPs from 7 opposition parties seek impeachment of the... 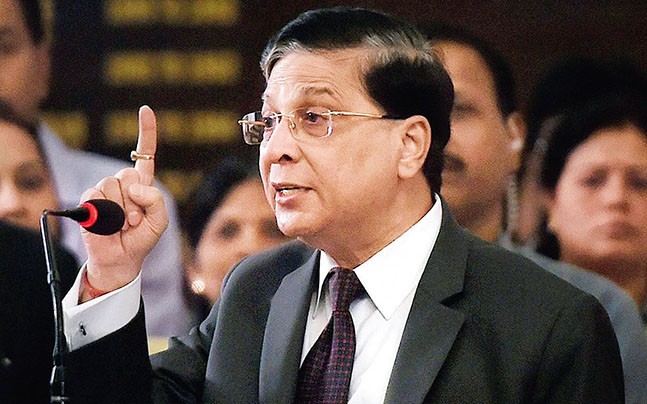 The Congress leaders said that the parties had to move the notice with a “very heavy heart” since Justice Misra had not “asserted the independence of judiciary in the face of interference by the executive”. They said they had the support of more 64 Rajya Sabha members. Such notices require the signatures of at least 50 members of a House.

Among those who attended the meeting in Parliament were Congress leaders Ghulam Nabi Azad, Kapil Sibal and Randeep Surjewala, and CPI’s D Raja and NCP’s Vandana Chavan.

“We wish this day had never come,” said Congress leader Kapil Sibal adding that when the judges of the Supreme Court themselves believe that the Judiciary’s independence is at threat, alluding to the functioning of the office of the CJI, should the nation stand still and do nothing?

The notice comes a day after the Supreme Court rejected a bunch of petitions seeking an independent probe into the death of Judge BH Loya, who was hearing the Sohrabuddin Sheikh encounter case. The SC judgment was delivered by a bench headed by the Chief Justice of India.

Loya, who was presiding over the Sohrabuddin Shah encounter case in which BJP president Amit Shah was one of those named, died of a heart attack in Nagpur in December 2014. Shah was discharged from the case soon after.

The motion to impeach the CJI, requires the signature of 50 Rajya Sabha MPs and can be moved even when Parliament is not in session. The Chair of the House may or may not admit it. If it is admitted, a three-member committee is set up to look into the charges. If it concludes that there is enough reason to remove the CJI, the House in which the motion was first moved takes it up for discussion and a vote. Once it is passed with a special majority (two-thirds of the members present and voting) in the house, it goes to the second house. If it is passed in both houses, it is presented to the President for the removal of the judge.