Home Home Slider ‘People question Aadhaar, but will get naked before white man for visa’,... 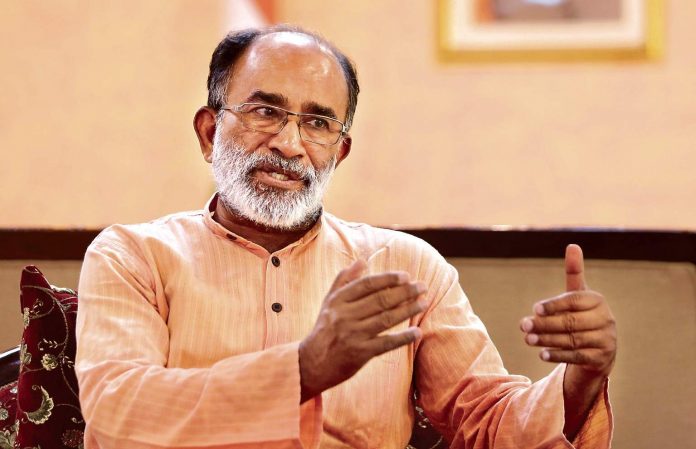 After media reports claimed the breach of the UIDAI’s database, Union Minister KJ Alphons on Sunday sought to slam Aadhaar naysayers with an interesting analogy.

“I filled up to 10 pages for US Visa form. We have absolutely no problem giving our fingerprints and getting body naked before the white man at all. When your own government asks for your name and address there is a massive revolution saying it’s intrusion in privacy (sic),” Alphons was quoted as saying by ANI.

I filled up to 10 pages for US Visa form. We have absolutely no problem giving our fingerprints&getting body naked before the white man at all. When your own govt asks for your name&address there is a massive revolution saying it’s intrusion in privacy: Union Minister KJ Alphons pic.twitter.com/PymtYRlvI1

The Minister of State for Electronics and Information Technology reacted to the opposition parties’ increasingly outspoken anti-Aadhaar sentiments, raising concerns about data safety.

While the BJP posted a strong rebuttal to these allegations, Alphons too scoffed at the notion that the country’s leader would be complicit in such a deed.

“You think Prime Minister is going to give your data to a private company! Don’t believe such fake stories,” he said dismissively.

Alphons went on to assuage people’s security related-concerns about the database of UIDAI, the Aadhaar-issuing body.

“What is given in Aadhaar are just name and address. Your biometric data is with UIDAI and let me assure you that it has not been breached, it’s absolutely secure. We have given authorisation to govt agencies to access,” he told ANI.

You think Prime Minister is going to give your data to a private company! Don’t believe such fake stories: KJ Alphons, Union Minister of State for Electronics and Information Technology in #Trivandrum pic.twitter.com/Zl59ooKOPn

CPI(M) general secretary Sitaram Yechury took exception to Alphons’ remarks and said the question was not whether people are unwilling to share information, but the Centre’s intent behind collecting data on the basis of Aadhar. He further claimed that the government may misuse this data to influence elections.

“The personal information of people is their personal liberty, which is also their constitutional right. This is very undemocratic and wrong. It’s an attack on people’s individuality,” said Yechury, as reported by ANI.

UIDAI had yesterday refuted reports about a fresh data leak of Aadhaar holders, and asserted that there has been “absolutely no breach” of its database.

It termed the data breach claims as “totally baseless, false and irresponsible”.
The statement was issued after ZDNet, a technology news portal, cited a security researcher’s claim to state that a system of state-owned utility firm was allegedly leaking information on Aadhaar holders.