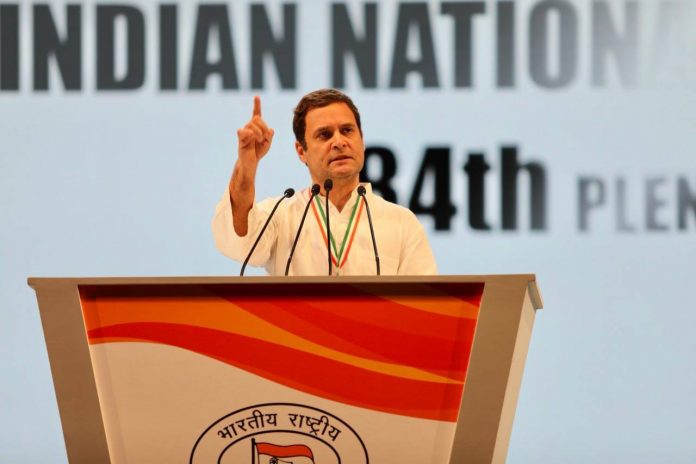 Elaborating on this statement, the Congress chief said that the Congress is “the voice of the nation”. He spoke at length about the youth feeling let down by the present BJP regime that had walked into the Parliament riding on promises of corruption-free environment and jobs but, had actually done the contrary.

Keeping the speech simple and short he took several digs at Prime Minister Modi alleging that the BJP was responsible of crony Capitalism and that two men who have the same name as the PM – Nirav Modi and Lalit Modi – have proved that the BJP government is corrupt and unscrupulous and that the name Modi symbolized that.

He also made a joke of the PM’s Yoga Day effort calling it an eyewash and “event management tactic” practiced by the government for diverting attention from real issues.

“The PM diverts our attention and jumps from one event to another from Gabbar Singh Tax to Yoga outside the Parliament but, never talks about issues. The Congress cannot be stopped from seeking truth and justice,” he said.

He joked at the PM’s attempt by saying, “chalo Yoga karein” whenever there is a real issue at hand.

Also Read: Indian economy is messed up because of BJP, says Manmohan Singh

He also said that the Finance Minister and his daughter are also involved in this and that is why Arun Jaitley has not spoken out against Nirav Modi till date.

Falling back on his rhetoric in Singapore, Rahul promised to work towards education for all and promised to build world-class educational institutions across India if the Congress is voted into power. He spoke of skill development and playing up the skills of each area of the country thus making India the “third vision” of the world after America and China.

He said, that the contest was against the Chinese who are present everywhere, from Doklam to Nepal and in the malls and markets. The Chinese presence is in everything across the world and that is where India has to move in and present the world with a third option.

“The world has two visions today, US vision and Chinese vision. I want the world to have a third vision, the Indian vision. The vision of love and mutual respect,” he said.

Summing up in Hindi, he said that the party had faltered in it’s last outing and had failed to come up to the expectations of the people of India and that is something the party understands and accepts.

He said that the “Congress leaders and workers have died for the country and I want to bring the old glory of the Congress back. There is space in the party for both the young and the old party workers.”

Gesturing at the empty dais, the Congress president, invited talented Indian youth and NRIs to join the party and work for the betterment of the nation.

He said that there was room in the party for every worker irrespective of their age or skill-set. “This empty stage is for the youth of the nation. Only the youth of India irrespective of caste and region can change the situation of the country. That is why this stage is here for you,” he said.

He said that the bitter truth about India today is that, “it is the fastest-growing economy but, no jobs for the youth.”

Elaborating further on what he said were the failures of the present regime, he said that people were afraid and institutions are in tatters. He said that the Congress will never allow that. “We are always here to protect you, the Hand of the Congress will protect everyone,” he reiterated.

Sharing an example, he said, “This is the first time we have seen Supreme Court judges rushing to the people seeking justice. There is a fear in the public and among institutions.”

“BJP is the voice of an organisation & the Congress is the voice of a nation,” he said and asked all party cadres to forget their differences and work together to ensure victory in the 2019 general elections.