Home Home Slider Samajwadi party wins both the bypoll seats in UP: Top highlights of... 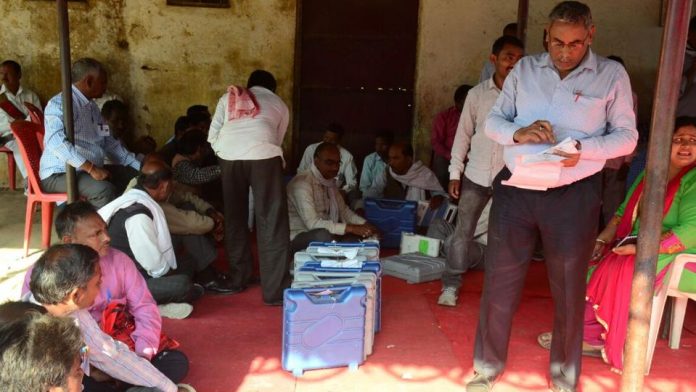 Counting of votes started today for the bypolls in the Lok Sabha seats of Phulpur and Gorakhpur in Uttar Pradesh. Samajwadi Party candidates won both the bypoll seats in UP. Though BJP didn’t win the bypoll, it is yet another defeat for Congress.

Here are the highlights and trends from the time votes began to be counted at 8 am today:

* Samajwadi Party workers rejoiced as their candidates were leading in both bypoll seats in UP.

* Gorakhpur bypoll: Samajwadi Party’s Praveen Kumar Nishad leading with 1,63,941 votes, while BJP’s Upendra Dutt Shukla was trailing with 1,50,062 votes after the 11th round of counting.

* Phulpur: SP’s Nagendra Pratap Singh Patel leading with 1,55,314 votes, whereas BJP’s Kaushlendra Singh Patel followed with 1,34,819 votes after the 14th round of counting.

* Latest from Gorakhpur: SP’s Praveen Kumar Nishad is leading by 74,077 votes, while BJP’s Upendra Dutt Shukla followed with 70,317 votes after the fifth round of counting.

* Latest from Phulpur: SP’s Nagendra Pratap Singh Patel is leading by 14,239, with a total of 1,11,668 votes, while BJP’s Kaushlendra Singh was trailing behind with 97369 votes after 10 rounds of counting.

* In Phulpur, Samajwadi Party’s Nagendra Pratap Singh Patel is leading by 12,231 votes with a total of 99,557 votes, so far. BJP’s Kaushlendra Singh Patel is second with 87,326 votes after eight round of counting.

* Earlier, in Gorakhpur, the BJP’s Upendra Dutt Shukla was leading, with 15,577 votes, and the SP’s Praveen Kumar Nishad was coming in second with 13,911 votes.

* At 10 am, the BJP candidate in Phulpur was trailing behind SP candidate, even though the latter was still ahead. The SP’s Nagendra Pratap Singh Patel was leading by 1,058 votes with 22,460 votes, BJP’s Kaushlendra Singh Patel at a close second with 21,402 votes.

* An hour into counting the Samajwadi Party’s Nagendra Pratap Singh Patel was ahead in Phulpur by with 7600 votes, while the BJP’s Kaushlendra Singh Patel got 6,163 votes after round 3.

* Voting for the two seats took place on Sunday. While 47 percent of the voters exercised their franchise in Gorakhpur, the turnout in Phulpur was lower, at 38 percent.

Russia Is Losing The War And It Will Change The World:...