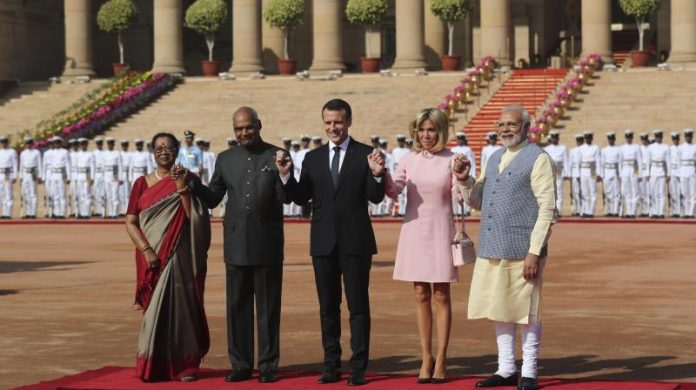 It’s been a busy morning for the visiting French President Emmanuel Macron and his wife who arrived on a four-day official trip to India last night.

President Macron, accompanied by his wife Brigitte Macron, started the day at the Rashtrapati Bhawan and inspected a guard of honour. It was followed by a meeting with his Indian counterpart, Ram Nath Kovind, his wife Savita Kovind and Prime Minister Narendra Modi respectively.

Afterwards, the French President and First Lady visited Rajghat, the memorial of Mahatma Gandhi and to pay tributes to the Father of the Nation.

Apart from the First Lay, Brigitte Macron he was accompanied by MJ Akbar, the Minister of State for External Affairs, and other officials.

President Macron signed the visitor’s book and was presented with a bust of Mahatma Gandhi.

Later, Macron said, “I am very happy and proud of this visit. I thank the President (Kovind) and Prime Minister (Modi) for this welcome. I think we have a very good chemistry and our two great democracies have a historic relationship.”

The French President stated that the visit would open a new era of strategic partnership in the coming decades.

“Our two democracies have common channels like terrorism, lots of common risks and common threats. But, we have to protect this history and the state for freedom,” he  added.

Delving into the details during the visit, the French President said that Prime Minister Modi would host a dinner for the French delegation at the International Solar Conference (ISA) and he would chair the conference tomorrow.

The ISA, an alliance of more than 121 countries, was initiated by Prime Minister Modi in January 2016. The primary objective of the alliance is to work for efficient exploitation of solar energy to reduce dependence on fossil fuels.

President Macron said that both India and France were committed to addressing climatic change and termed it as a ‘critical battle’ not only for the two countries but for other countries as well.

The French President called for his country to be India’s best partner in Europe.

“I want my country to be the best partner in Europe. This is a strong message. I want Indian citizens coming to France for studying, becoming entrepreneurs and opening start-ups.”

Prime Minister Modi and President Macron on will next hold delegation level talks.

During the talks, both the leaders are expected to review the progress achieved in bilateral relations and exchange views on regional and international issues of mutual interest. Several agreements are expected to be signed in various areas.

The visit aims at strengthening the bilateral economic, political and strategic dimension of engagement between the two countries. Besides, the visit is also aimed at forging not only strong manufacturing and technology partnerships but also greater people to people contacts.

The India-France CEO’s Forum will also take place during the visit.

The bilateral trade between India and France from April 2016 to March 2017 reached 10.95 billion dollars.

France is the ninth largest foreign investor in India with a cumulative investment of over six billion dollars from April 2000 to October 2017.