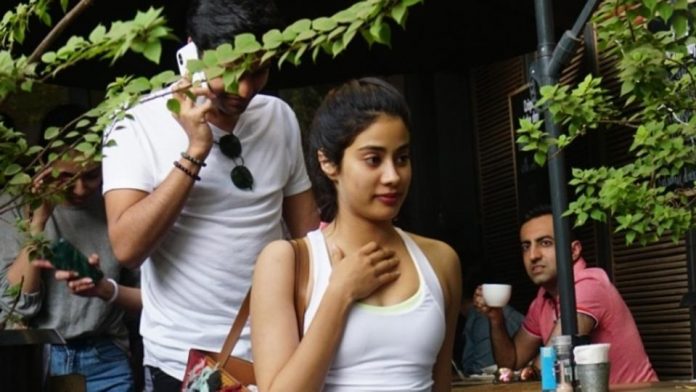 Janhvi Kapoor celebrated her 21st birthday on Tuesday unlike many of celebrities. In remembrance of her mother Sridevi, who died last month in Dubai, Janhvi celebrated her birthday an old age home or an orphanage – a tradition which was started by the legendary actress.

Several online tabloids early on Tuesday published pictures of Janhvi celebrating her 21st birthday at an old age home or an orphanage. Pictures of her cutting cakes and interacting with elderly women at a care home has gone viral now.

Multiple fan pages dedicated to Janhvi are sharing pictures of her staring sadly at the floor even as her friends surround her with cakes. In another video, she is seen clapping her hands as the women around her sing the birthday song for her.

A few days following her mother’s untimely and shocking demise, Janhvi posted an Instagram post for her followers, asking them to love their parents. “Cherish them and devote yourself to making them feel that love. They have made you. And I ask that you remember my mother fondly, pray for her soul to rest in peace,” she had written in a long post. A few lovely family pictures were also posted.

To one of the strongest girls I know, who became a woman today. Happy birthday jannu. ❤❤❤ @janhvikapoor #21stbirthday

Actor and Janhvi’s cousin, Sonam Kapoor also shared an encouraging birthday wish for her. “To one of the strongest girls I know, who became a woman today. Happy birthday, jannu,” she wrote in the post.

Legendary actress Sridevi died in her hotel room in Dubai on February 24 due to accidental drowning. She is survived by husband Boney Kapoor, Janhvi and younger daughter Khushi.