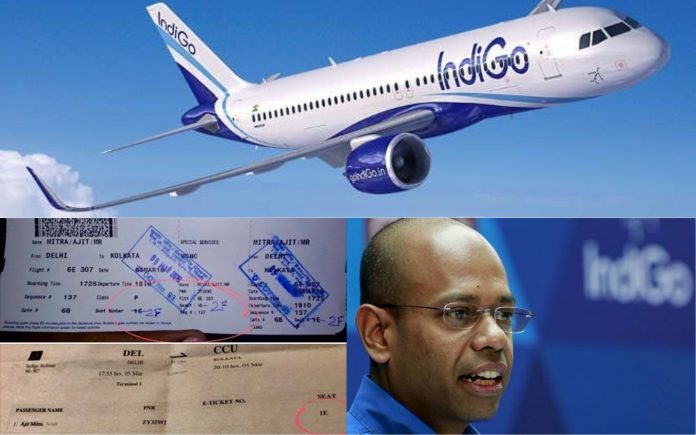 Gurugram: India’s budget airline IndiGo is once again in an eye of a storm this time for harassing a senior citizen on board Delhi-Kolkata flight on Monday.

Ajit Mitra, 88, who is suffering from weak arthritic knees had booked a specific seat- 1E on Delhi-Kolkata flight for the extra legroom and proximity to the washroom and paid an extra amount of ₹600 to get the desired seat.

But at the time of boarding the man was denied the seat 1E and had been arbitrarily shifted to seat 2F even though the boarding pass with 1E, had been issued.

The granddaughter of the passenger, Rai Sengupta, in a Facebook post wrote: “At the last minute, an Indigo official took his boarding pass away and made a manual change in his seat number from 1E to 2F.”

Rai Sengupta, granddaughter of the passenger discribes the whole incident to NewsMobile:

“2F is a window seat which meant that my grandfather with his shaky arthritic legs would have to cross TWO seats to go to the washroom. Naturally, it was a very cramped, uncomfortable journey and he couldn’t go to the washroom till the end of the flight,” Sengupta added.

ALSO READ: IndiGo puts a passenger on wrong flight; he lands in Nagpur instead of Indore

When NewsMobile contacted, President of IndiGo, Aditya Ghosh, he at first denied of knowing about the incident, but later he said that the passenger couldn’t get his desired seat as the seat was near the emergency exit and disabled people cannot sit there.

“First row in an emergency exit, no person who is not an abled body person can sit on an emergency row exit on any aircraft,” Ghosh said.

On being asked whether it was known before the seat was allotted to the passenger, Ghosh said, “It was not allotted, they bought the ticket two-month ago,” and he was outrightly rude and disconnected the call.

However, in a bizarre twist, Indigo President Ghosh’s was caught lying.

The second lie was that the passenger was shifted because he wasn’t able-bodied. And row 1 was emergency exit which aviation experts say is not correct.

This is not the first time IndiGo has courted controversy , as a few months ago a video of an IndiGo staff and a passenger engaging in a brawl at Delhi’s Indira Gandhi International Airport surfaced on social media.

The video of the incident, which took place on October 15, shows the duo thrashing and abusing each other. It also shows the airline staff holding the passenger down by the throat.

ALSO READ: Indigo writes to Civil Aviation Minister saying ‘we were at fault’

Aviation insiders say, The airline promoted by Rahul Bhatia of interglobe who was once known for impeccable customer service, has fallen many notches on its terrible handling of the customer which senior executives like Ghosh have only compounded with their rude and arrogant behaviour.

Sources recall that even after the previous incident Ghosh was advised by insiders not to right an arrogantly worded letter but he went ahead, which evoked a sharp reaction on the Social Media and from the Aviation Ministry.

With a history of such incidents, it is high time that DGCA and airline management takes action against these officials who are derailing the dream of the PM Narendra Modi to put flying to the reach of ordinary citizens.