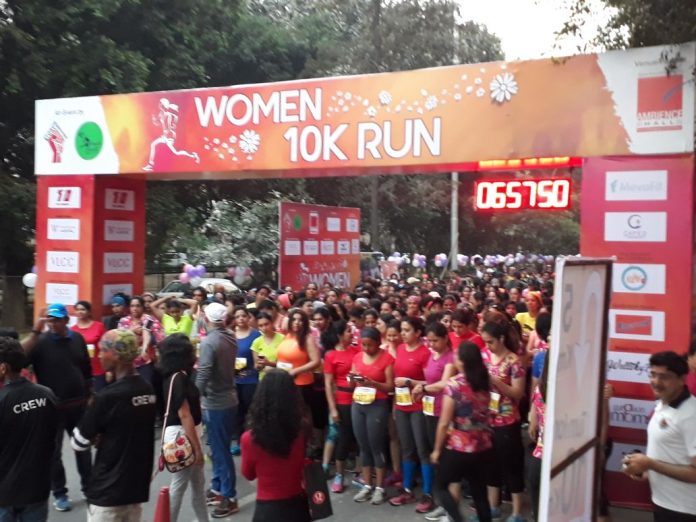 One run can change your day, many runs can change your life goes a famous saying and each G-towner who participated in the #women10krun at Ambience Mall on March 4 swears by it. A popular precursor to International Women’s Day on March 8, this Sunday run has gotten bigger and better with each passing year. In fact it’s now become one of the well-entrenched traditions of Gurugram that binds people from every walk of life in a celebration of camaraderie, healthy living, balanced nutrition and team building.

It was also a perfect opportunity to come together in support of the 2018 theme for Women’s Day: #PressforProgress, “with a strong call-to-action to press forward and progress gender parity… a strong call to motivate and unite friends, colleagues and whole communities to think, act and be gender inclusive” in a bid to accelerate UN’s 2030 Agenda.

Talking to News Mobile, Coach Ravinder Singh, the man behind the idea of the #BetiDeshKiShan run said, “the main aim of this event is to encourage more and more women to come out and take up running. Due to safety reasons, it is not easy for women to run in the city. So we are gathered here to promise them that all the men – husbands, co-runners, sons and friends – are with you to support you in this wonderful journey not just today but all the year through. So come run and feel runderful.” Among Coach Ravinder’s other popular runs are the 100k and potpourrie challenge, besides trail runs and starry night marathons.

No wonder, thousands of eager runners and cheer leaders clad in colouful sportswear gathered at the venue before sunrise for the motivational run. The event began with Power house Anwar Hussain and his troop doing a round of warm up with some groovy Zumba moves. Matching his peppy Latino beats, 63-year-old Seema Seth, who runs a school for underprivileged children in Phase 5, personified the event’s credo: Live it to believe it, as she did the stretches, squats and cardio exercises.

The star of the #women10krun 2018, was another hugely inspiring 60 year old: Mexican Ambassador to India, Melba Pria, a triathlete par excellence, who along with run icons ex Naval Officer Tanuja Sodhi and ultra runner Ranjana Deopa raised a toast to all the women participants.

“I am very proud to be here,” said Ambassador Melba Pria in her endearing lilt, “because I see so many women. You are inspiring. You are the icons,” she added, charming one and all with her joie de vivre as she posed uninhibitedly for selfies. For more inspiration, there was Gurugram’s very own Ironman Gaurav Makkar and Sari icon Shakti Khanna, along with the vivacious fitness guru Tanya Aggarwal.

At exactly 7 am, the hooter sounded for the 10k run and off went the enthusiastic runners firm in the belief that “if you run you ARE a runner, doesn’t matter how far or how fast!”  For first timers and tentative runners, there were the 5k and 3 k runs, as well as the 5k walkathon.

It is said that the tradition of running began in true earnest in India in 2008. Ten years down the line, events like the Women’s 10 k run prove that you don’t have to be great to start, you have to start to be great. And thousands of G-towners made a great start today!