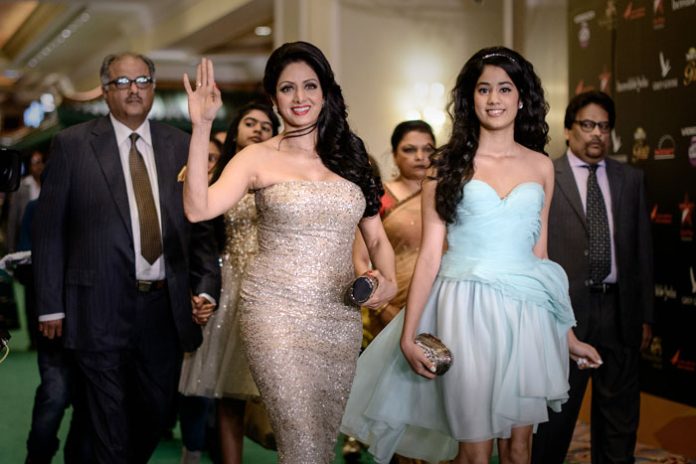 It was only last weekend that her fans woke up to the dreary news of sudden demise of Bollywood’s acting legend Sridevi. Initially many thought that it was fake news and will die down but, the confirmation was quick and all hopes of her fans across the world was shattered by the legendary actress’s sudden demise.

Sridevi is no more. She died by accidental drowning in Dubai and has now been cremated with full state honors here in India. Entire Bollywood came to pay their respects and many were seen crying at the funeral. Indeed, 54 is hardly an age to pass on to the other world.

Her extended family was in full attendance and stood by her husband and daughters in this time of grief. Many speculated on her daughter Janhvi Kapoor’s raction and media was flooded with the soon-to-debut actress’s early reaction as the news of her mom’s death reached her on sets while she was shooting – Janhvi, it was reported had fainted upon hearing.

She didn’t make any comments while her mother’s body was brought back from Dubai and later cremated in Mumbai. People understood and gave her space to grieve the sudden loss of a parent.

Today after a week, Janhvi Kapoor has broken her silence and published a heartfelt note to her mom on Instagram. On her birthday, Sridevi’s young daughter appealed to her fans and followers to cherish their family and love them while they are around.

Calling her mother her ‘everything’ she wrote that if she and her sister have lost their mother, then her father had lost his ‘jaan’.

A simple note, a profound and often-told story, “love your family while they are around.”

On my birthday, the only thing I ask of all of you is that you love your parents. Cherish them and devote yourself to making them feel that love. They have made you. And I ask that you remember my mother fondly, pray for her soul to rest in peace. Let the love and adulation you’ll showered on her continue and please know that the biggest part of my mother was the love she shared with papa. And their love is immortal because there was nothing like it in the whole world. Nothing as joyful and pure and no two people as devoted to one another as they were. Please respect that because it hurts to think anyone would ever try to tarnish it. Preserving the sanctity of what they had would mean the world not only to my mother but also to a man who’s entire being revolved around her, and her two children who are all that remains of their love. Me and Khushi have lost our mother but papa has lost his “Jaan”. She was so much more than just an actor or a mother or a wife. She was the ultimate and the best in all these roles. It mattered a great deal to her to give love and to get love. For people to be good and gracious and kind. She didn’t understand frustration or malice or jealousy. So let’s be that. Let’s be full of only good and give only love. That would make her happy, to know that even in death, she gave you all something. The courage and inspiration to fill yourselves with nothing but love and rid yourselves of bitterness in any way and form. That’s what she stood for. Dignity, strength and innocence. Thank you for the love and support everyone has shown us in the past couple of days. It’s given us hope and strength and we can’t thank you all enough.

It is indeed heartbreaking to read the note with the accompanying text where the upcoming actress pays a tribute to the woman we all knew as Sridevi but, she knew as her most-adoring mom.

Happy birthday Janhvi, may your mother’s soul rest in peace and may it continue to guide you as you embark on your journey as an actor.