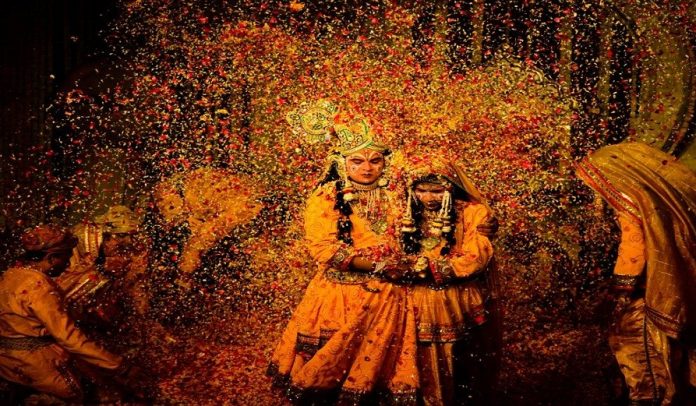 Mathura-Vrindavan, popularly known as Brij Bhoomi has its very distinct Holi flavor. A flavor that attracts hundreds and millions of euphoric pilgrims and tourists from across the world every year mainly to participate in the phoolon ki Holi at Bank-e-Bihari temple, but also to witness Barsana’s one of a kind Lath Maar and Laddoo Holi, along with the path-breaking tradition of Holi played by the widows of Vrindavan at the historic Gopinath temple.

This year the celebrations began with a few widows from Vrindavan presenting 11 earthen pots of herbal gulaal and sweets to Narendra Modi ‘bhaiya,’ according to reports.

Clad in pristine white sarees, the widows of the Vrindavan ashram, some of them abandoned by their family and friends, added a splash of color to their lives with “over 1,600 kilograms of flower petals and 1,600 kilograms of gulaal this year” singing bhajans and greeting everyone with the traditional Radhe radhe.

It is interesting to note here that in many parts of India, tradition forbids widows from participating in festivities of any kind. As such, “Sulabh’s attempt, which started in 2012, to try and integrate widows into the mainstream is truly laudable,” the report adds.

Vrindavan Holi is a week-long affair marked by holika dahan, processions, Shayan aarti, non-stop singing of hari bhajans amid dancing and chants of Hathi, ghoda, palki, jai Kanhaiya Lal ki that cut cross barriers of caste and creed. The vibrant atmosphere in the land of Rass-Leela is such that enthusiastic photographers from across continents come here in drove during the spring season to try and capture its essence for eternity.

Among the many legends associated with Holi, one talks of how Lord Krishna wasn’t very happy that he was dark while Radha was fair. Ma Yashoda suggested in jest that he go to Barsana, Radha’s hometown, and color her and the gopis. But when Krishna did that, the women in return playfully beat him with sticks, starting the Lath Maar tradition.

Be it a shower of delicate flower petals or a playful whack with the lath, Holi in Mathura-Vrindavan has a unique charm totally living up to the spirit of the effervescent Holi mantra: Bura na mano Holi hai!