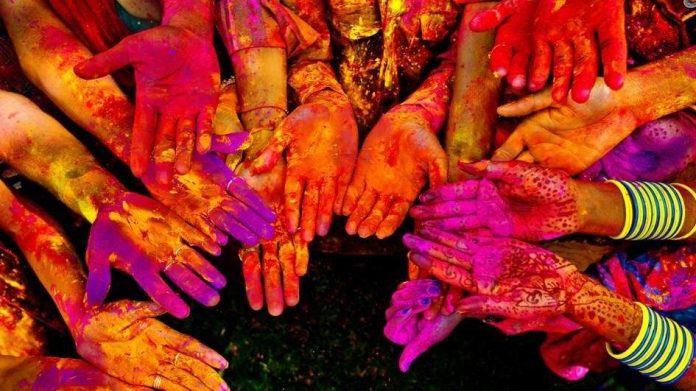 #Holi2018 is on in full festive fervor across the nation from traditional Lath Mar in Uttar Pradesh to the folkish Basat Utsav in Bengal. From high-octane Hola Mohalla in Punjab to Vrindavan’s stupendous cultural spectacle.

Gujarat this year has given a La Tomatina twist to its celebrations, while across the world people in Turkey were doused in green powder to mark the colorful-extravaganza. Strains of eternal favorites Rang barase and Holi khele raghubeera are interspersed with the new chart busters Balam pichkari and Go pagal as people exchange greetings to the beats of the dhol.

Topping the trend though is this perfect modern take on Holi from Badrinath Ki Dulhania because of its groovy dance moves and sizzling chemistry.

Today’s #Holi made extra special with some thandai made by yours truly 🙂 Happy Holi everyone, be safe. pic.twitter.com/lhg8bdfhz7

People all around are nostalgic talking to News Mobile about their favorite Holi memory, songs and the one celebrity they would love to play Holi with. The mood is infectious and it looks like celebrations will spill over and continue into the weekend.

Amid all the gaiety though, Holi cartoons by India’s extremely talented cartoonists once again take us back to the harsh reality by presenting a satirical take on social issues that continue to plague the nation like farmer’s suicides, water shortage, pollution, sexual harassment, crime and political apathy.

Following the infamous semen-balloon incident, wide-spread protests and slogan-shouting, especially by DU students also marked #Holi2018. Chants of “Bura kyon na manoon?” filled the air and angry millennials issued a “keep your sperm to yourself” warning to hooligans calling for “ending patriarchy” as they took to the streets demanding strict & prompt action against the culprits.

However, thinking positive and hoping everyone had a fun-filled Holi with their loved ones,here’s a message of love, friendship and togetherness to lighten the mood and to make us believe that there’s a colorful rainbow behind the dark cloud. #HappyHoli guys.