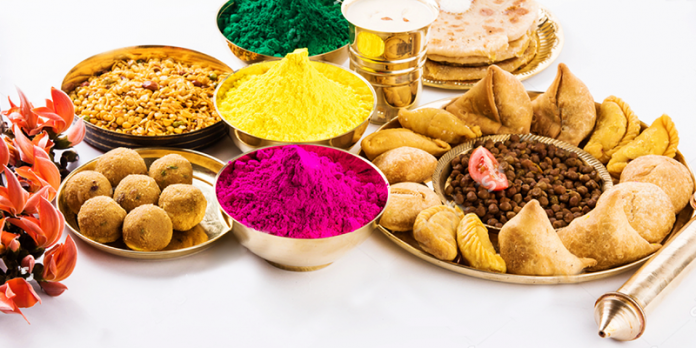 Food has always been a metaphor for the smorgasboard of India’s rich and vibrant cultural heritage. Onam Sady is incomplete without theeyal, Eid automatically conjures up images of Sheer Khurma and Christmas is synonymous with the traditional dry fruit and liqueur pudding. For most Indians, Holi similarly is another excuse to binge on gujias, the low-sugar-low-oil DASH diet be dashed.

The appetizing aroma of kesar-illaichi flavored gujjias bubbling in hot oil already pervades Rubina Prakash’s kitchen in Sector 42. “Home-made gujjias is a nostalgic tradition we carry forward from our childhood, along with savoury ajwain namak pare,” she tells News Mobile as she piles up a plateful of golden-brown dumplings filled with the goodness of moist mawa, coconut and generous helpings of chopped dry fruits “ strictly according to ma’s shuddh desi recipe.” None of the faddish chocolate-coated, sugar-syrup encrusted or even Nutella and Jam filled baked versions for her, no Sir!

Food consultant and developmental chef, Jyotika Malik, on the other hand will be having her very first traditional gujjia this Holi “believe it or not” at a “rain-dance and chaat” do she’s attending on Friday. Having lived abroad a greater part of her life, the novice Gurugramwasi says “in Switzerland Holi was a sober herbal gullal kinda affair over a poori-channa lunch in authentic kansa bartans followed by a Diwali-style taash party, while in Dubai all hell would break loose as people were dunked into colour-filled swimming pools in expat villas.”

Standing at the kabab stall in Galleria, 20-year-old Sandeep Sinha is very excited about the bhaang thandai that he and his friends are planning to make this Holi “along with cannbis-laced gujjias and pakoras.”

Twelve-year-old Natasha, on the other hand, “just loves her Nani’s malpuas and papdi chaat.” Debating on the pros and cons of which pichkari to buy: the Minion water gun or the Angry Bird back pack at a thela in Sector 14, she squeals in delight at the prospect of having tangy puchkas at Jitender bhaiyya’s stall in Sector 56.

Gujia, gol gappe, pakodi, malpua, thandai or poori-chole, Holi is one day you can go on a guilt-free see-food diet for it’s the food that sets the mood. So here’s wishing all News Mobile readers a yummylicious Holi – Let the celebration begin!