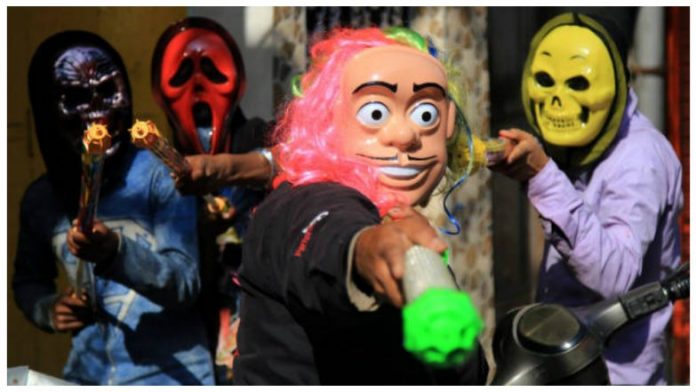 A very dark shade of black is tarnishing the festival of colors yet again, and it’s taken on a particularly vicious hue this festive season with the nightmarish semen-filled balloon incident going viral on the Internet as a precursor to Holi. This growing “sab kuch chalta hai” tendency in the garb of celebration is nothing but a particularly outrageous mix of blatant sexual harassment – the bane of our times – and the inexplicable inertia of the regulatory mechanism.

Year upon year, newer and more ghastly episodes of Holi-ganism evolve as the authorities fail to capture the black sheep red handed due to grey areas in public vigilance. As a result Holi, for a whole lot of millennials, has sadly come to mean “lolling in bed till late, not getting out of the house and just whiling away time in front of the telly” to avoid being groped, forcibly smeared with metallic toxins and drenched against their will. A damp squib in fact as against the infectious maahaul of masti and mazza the festival signified earlier with hasya kavi sammelans, tilaks, pooja, antakshari and gujia overload.

RJ Swati spoke of how juice vendors were being approached by rowdies to gather all sorts of rubbish to fill into balloons, including “pulpy garbage.” The festival started becoming more of a public menace when hurling rotten tomatoes and eggs became part of the un-Holi tradition, last year there were reports of sadists resorting to throwing stone-filled balloons, harmful chemical colors and slimy keechad.

And it’s not just people, animals (especially stray dogs and cows) and condominiums walls and lifts also face molestation as color-maniacs go berserk with absolutely no regard for social etiquette or public morality.

The way things are getting out of hand, women’s organisations have been forced to send memos to the government requesting “ban on the sale of balloons along with appropriate measures to curb hooliganism and harassment of women in the run-up to Holi, including heightened police patrolling and regulation of unruly Holi processions.”

It’s quite an un-Holi mess. The festival of color seems to have lost its lustre as Holi wishes now have the mandatory “safe” with the “happy” bit. A post on Facebook says:”Here’s wishing you a Holi filled with  sweet moments and colorful memories to cherish forever… Happy Holi.” Will Holi 2018 live up to this expectation?