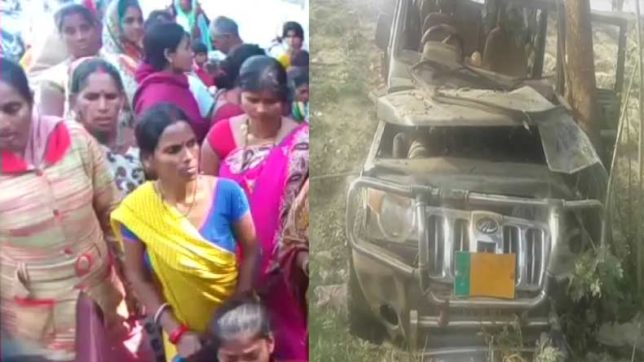 In the all pervading din of the Nirav Modi mega-bucks scandal, the electoral heat building up in the North-East and non-stop investigation into superstar Sridevi’s sad demise, it looks like the tragic news of the mowing down of nine children in Bihar’s Muzaffarpur district, allegedly by BJP’s Manoj Baitha, has somewhere got buried.

While reports filtering in claim that Baitha is absconding and has in fact “escaped to Nepal”, the Bihar police have lodged an FIR against the BJP functionary who was “driving the speeding SUV”. No arrests have, however, been made as yet. At least nine children were killed and 10 injured by a speeding SUV as they were crossing the NH-77, most of whom were apparently lined up near the road to go home after school.

“BJP functionary Manoj Baitha was driving the SUV which crushed the nine children to death,” Minapur SHO Sona Prasad Singh said on Monday, adding that the police have conducted several raids at Baitha’s village, Fatehpur, to arrest him, according to reports.

Cries of “Mr Kumar have some shame” and “Grieving mothers abandoned by state” are rising by the minute as the heart-broken parents of the victims demand justice. “Gareeb ki koi maddat honi chahiye, (someone should come to the rescue of the poor),” lamented one dazed mother, while the father of one of the deceased categorically claimed that “the vehicle had party stickers and that some people saw Baitha running away from the accident scene.”

The police said further that , “CCTV footage captured at a toll in Sitamarhi shows Baitha driving the SUV. The footage was sent for forensic examination to prove that Baitha was on the wheels.”

Meanwhile, the only significant development in the whole story is Baitha’s suspension from the party for six years, interestingly “Baitha did not hold any rank in the party and was only a member,” according to BJP.

Deputy CM Sushil Modi, had promised strict action against Manoj Baitha for allegedly mowing down nine children “under the influence of alcohol” but claims and counter claims in the aftermath of the tragedy accuse the ruling JD(U)-BJP combine of “trying to protect the absconding functionary.” Baitha’s driver too is currently at large.

Censuring the state government in his tweet, Congress chief Rahul Gandhi said: “In ‘drug free’ Bihar, a BJP leader under the influence of liquor kills nine innocent children. Nitishji, is this the truth of your prohibition? The voice of your inner conscience is saving whom – the accused BJP leader or the truth of liquor in Bihar?”

Despite Chief Minister Nitish Kumar’s order of a “speedy probe and tough action against the guilty driver,” the ground reality remains sketchy and even as protests on the road and in the assembly continue, the administration’s “inaction” in the whole case has yet again raised a question mark on the basic rights of people in a democracy.