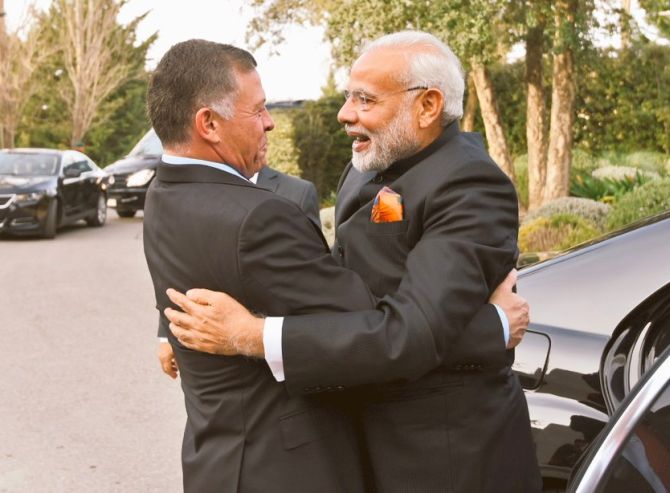 The Indian Prime Minister Narendra Modi’s visit to Jordan is the first by an Indian PM in three decades. The former PM, Rajiv Gandhi was the last to visit Jordan in 1988.

The PM arrived in Jordan on his way to Palestine. The Prime Minister’s Office (PMO) expressed gratitude to King Abdullah II of Jordan for facilitating the transit.

On his arrival in Amman, Modi was received by his Jordan counterpart, Hani Al-Mulki.

“Jordan’s King Abdullah II described it [the visit] as the beginning of the new chapter in our [India and Jordan] ties,” the foreign ministry informed the media.

The PM has invited the King of Jordon to make a state visit to India in late February for three days.

“Prime Minister Narendra Modi is looking forward to the visit. During the visit we [India and Jordan] will discuss several issues including how to take the bilateral relationship forward,” it was informed in the briefing.

India and Jordan enjoy friendly ties since diplomatic relations were established in 1950.

Saturday morning’s “Jammu and Kashmir attack in [Sunjwan camp] was also discussed with the Palestinian President Mahmoud Abbas. The Indian PM told him that we should fight against terrorism together and added that it is well known where those actions are emanating from and India will take all necessary steps to ensure to fight terrorism,” Foreign Secretary Vijay Gokhale said in a media briefing in Abu Dhabi.

The spokesperson also threw light on the fact that the King of Jordan has started the Aqaba process and has worked on the issue of de-radicalization.

“Both the leaders [Indian and the Jordanian] agreed that terrorism poses a huge challenge and has to be countered in unison. The King appreciated that India is a moderate society even after all these years,” the Foreign Secretary added.

The Foreign Security also underscored that India does not have any specific defence cooperation with Jordan by far. A joint meeting has already been held to discuss the same in December.

“We are looking at some of the requests that the Jordanian side put forward for capacity building including in the area of cyber security and in the area of maintenance of equipment,” he added.

“In terms of fight against terrorism, the UAE has zero tolerance policy and not only that, they have a very aggressive program to counter extremism and on de-radicalization,” he added, “Not only do we talk about terrorism in general terms but, also cooperate on specific terms .”

Outlining the details of the defence and security cooperation with the UAE, the Ambassador noted, “We have important and growing defence cooperation. We have had regular training exercises and regular exchange of visits. The new thing is the first ever bilateral naval exercise that will be conducted in March right here.”

The Ambassador stated that both UAE and India have common interest in maritime security.

“The Crown Prince described the Prime Minister as a friend. He said that Abu Dhabi was his second home,” this was shared at a media briefing in Abu Dhabi.

“… but what’s particularly noteworthy was (the fact) that on more than one occasion, he (the crown prince) had said that the contribution of Indians in building the UAE is what every citizen of Abu Dhabi appreciates,” Gokhale added.

Crown Prince Al Nahyan said that the “Indians with their hard work and trustworthiness have built this country. The Indian community can be trusted. Trust was the word used,” he disclosed.

Branding the reception at Abu Dhabi an “exceptional honor”, Gokhale said, “The Crown Prince of Abu Dhabi himself and the members of the royal family were present at the airport to receive Prime Minister Modi. This is an exceptional honor.”

India and the UAE have signed five Memorandums of Understanding (MoU)s in total.