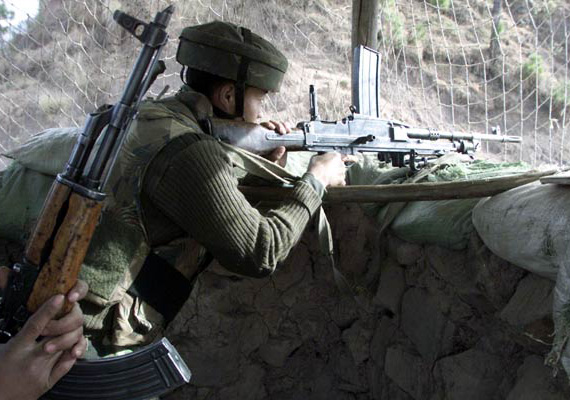 Pakistan troops across the Line of Control in Jammu and Kashmir’s Rajouri district once again began shelling that killed four soldiers and one injured on Sunday.

Firing intensified at Indian military posts and villages along the Line of Control or LoC in Poonch and Rajouri districts this morning. Pakistan once again violated the ceasefire. A teenage girl and a soldier were injured in Poonch. The Indian Army said it was responding justly. Pakistan used “small arms, automatics, mortars and missiles” in the unprovoked firing, it said.

Pakistan Army has targetted Poonch for the second time in three days, using automatic weapons and mortars. Last week, they targeted military and civilian facilities in almost a dozen areas of the Balakote sector.

It was the second time in three days that the Pakistani Army has targeted Poonch, using automatic weapons and mortars. They targeted military and civilian facilities in nearly a dozen areas of the Balakote sector last week.

More than 130 instances of ceasefire violations by Pakistan in last month, says Indian forces. It is highest since 2014.

It’s worth pointing out that nearly 14 people including eight civilians and six security personnel had been killed in Pakistan firing in the Jammu region between January 18 and 22. More than 60 people were wounded and dozens of homes were destroyed and burnt down in the firing.

Besides at least 300 schools situated close to the Line of Control and the international border in Rajouri, Poonch, Jammu, Samba and Kathua districts were closed for a week between January 21 and 28, for the security of villagers. More than hundreds have fled their homes close to the border, leaving behind cattle and crops.

While Home Minister Rajnath Singh said during an election rally in Agartala that India wanted peaceful relations with Pakistan, but the country’s forces have been ordered that should one bullet comes from across the border, the security personnel should fire countless bullets to retaliate. “I have given standing orders to our forces to shoot limitless bullets to retaliate a single fire on our territory by the Pakistani forces,” said Singh.