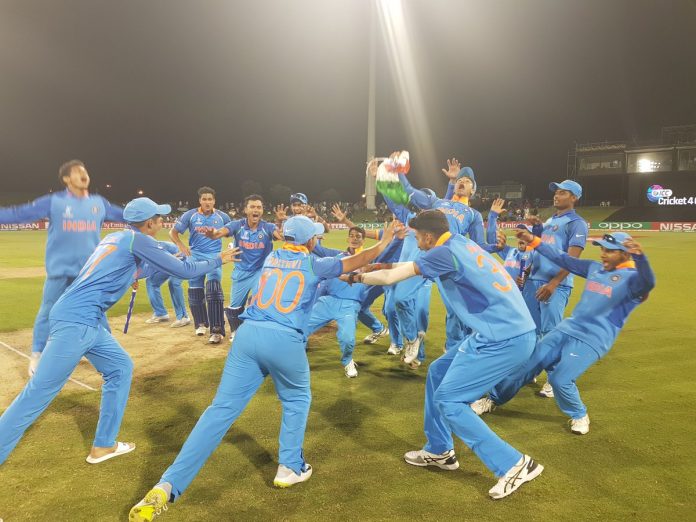 The under 19 Indian Cricket team lifted the World Cup today for the fourth time creating history as they did so.

The team coached by The Wall, Rahul Dravid, lifted their record fourth World Cup trophy as they triumphed over Australia with an eight-wicket victory in the finals today.

The Indian opener Manjot Kalra grabbed eye balls with his unbeaten 101 as the boys chased a traget of 217 in just 38.5 overs.

It was an all-around performance by the team lead by Prithvi Shaw. The Indian spinners sent shivers down the Australian batsmens’ spines with their magical spell, followed by a magnificent show with the bat.

Opening batsmen Shaw and Kalra gave India a head start before rain interrupted the play in the fourth over.

Australia got their first breakthrough when Shaw was dismissed by Will Sutherland at 29.

Coming to bat at number three, Shubman Gill, who had scored a ton in the semifinal against Pakistan, was cleaned bowled by Param Uppal at 31 runs.

However, Kalra remained rooted to the crease along with Harvik Desai to guide India to another World Cup glory.

Anukul Roy, the leading wicket-taker for India, dismissed Merlo in the 45th over.

Kamlesh Nagarkoti rounded up the tournament with nine wickets as he dismissed Australia skipper Jason Sangha on 13 and Zak Evans on one.

Manjot Kalra was adjudged ‘Man of the Match’ while Shubman Gill was awarded ‘Player of the Tournament’.

For Australia, all-rounder Jonathan Merlo became the highest scorer with his 76-run innings after the Indian blowers ripped through their top-order.

With this victory under his belt, Captain Prithvi Shaw joined the likes of Mohammad Kaif (2002), Virat Kohli (2008) and Unmukt Chand (2012) in leading India to the U-19 World Cup title.