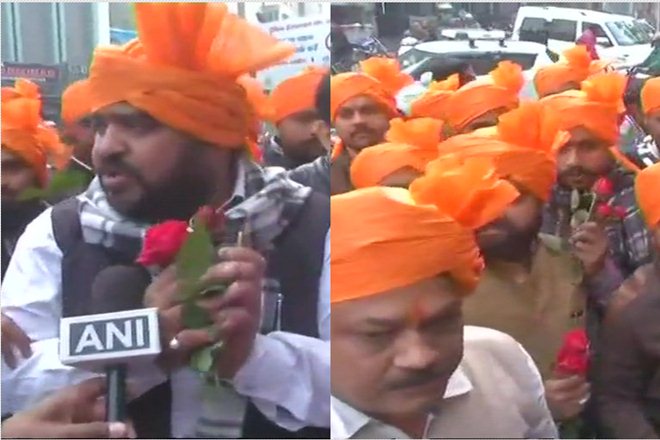 Sanjay Leela Bhansali’s most ambitious film Padmaavat was released on Thursday in theatres across the country except Rajasthan, Gujarat, Madhya Pradesh and Bihar amidst threats of violence and protests by right-wing fringe outfits alleging that the film distorted historical facts.

However, the protesters in Lucknow took to ‘Gandhigir’ and presented roses to moviegoers outside cinema halls requesting them not to watch Padmaavat “in solidarity with the Rajput community. While bouncers were hired by an Agra multiples to ensure peaceful screening.

“If I don’t watch the film, I would be supporting Karni Sena and the violent protesters who attacked a school bus carrying children in Gurgaon on Wednesday,” an aged man who saw the film in Lucknow said.

Almost 40 bouncers, clad in black attire, were hired in Agra, who ushered moviegoers in and out of the theatre even as protests by members of Karni Sena and Hindu Jagran Manch continued. 20 tickets were given to bouncers for each show who sat among the audience, preventing them from any mischief.

Shortly after Supreme Court accepted to hear contempt petitions against four state governments on Thursday, Bhupendra Singh, MP home minister said after a meeting with the CM that the state did not ban screening of the film and that police was “alert and monitoring law and order”.

Narottam Mishra, MP government spokesman, said the administration was “clear that the time isn’t right for screening the movie”. While Chief secretary Basant Pratap Singh said, “Distributors have been asked to take a decision.” Only one movie hall in Bihar showed the film. Though the Kisan cinema hall at Biharsharif, 55km away from Patna, cancelled all the shows after its morning show as protesters vandalised the theatre, which is owned by BJP’s Biharsharif MLA Sunil Kumar.

While in Saharsa, BJP MLA Neeraj Kumar Singh Bablu displayed a sword as he led a group of protesters. Karni Sena members and other fringe groups held a “half-day” bandh, called ‘Janata Curfew’, in Udaipur. They threw stones at car showrooms, set fire on vehicles, terrorized shopkeepers and blocked roads. Several towns had a deserted look. Sree Rajput Karni Sena refused its role in the attack on a school bus in Gurgaon and asserted that the media was acting on the directions of Bhansali.