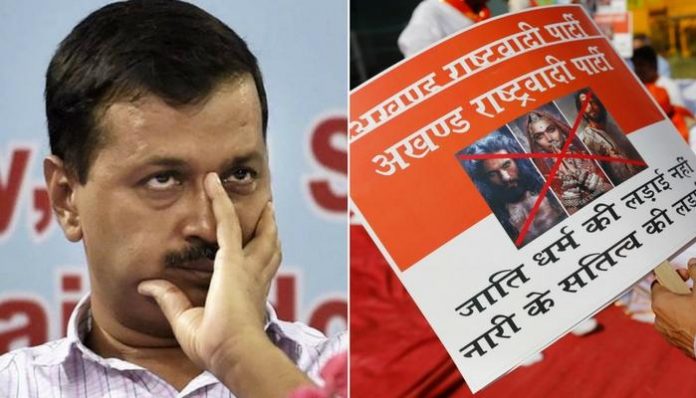 Delhi Chief Minister Arvind Kejriwal on Wednesday proposed questions over the incompetence of the state and central governments in ensuring the safe release of the controversial movie “Padmaavat” amidst violent protests led by a Rajput group and other fringe groups.

“If all state gov(ernmen)ts, central gov(ernmen)t and (the) Supreme Court together cannot get one movie released and run safely, how can we expect investments to flow in,” Mr Kejriwal tweeted.

If all state govts, central govt and SC together cannot get one movie released and run safely, how can we expect investments to flow in? Forget FDI, even local investors wud feel hesitant. Not gud for already dwindling economy. Bad for jobs

Kejriwal’s tweet came after Karni Sena, at the vanguard of anti-“Padmaavat” protests, threatening that its activists won’t allow the Sanjay Leela Bhansali directorial be screened in movie halls, for it depicts Rajput queen Padmavati in less than honourable light.

Lokendra Singh Kalvi, Karni Sena chief, claimed that the Rajput organisation won’t allow the release of the film Padmaavat “January 25 may come and go but we won’t let the film release, come what may,” he said.

As per reports, violence and protests erupted from parts of Haryana, Gujarat, Rajasthan and Uttar Pradesh – the states that had originally banned the movie.

Police lathi-charged protesters in Etawah, Uttar Pradesh, who damaged vehicles and forcibly shut down shops. Several vehicle owners were injured. Even the Delhi-Jaipur highway was blocked by protesters. The Karni Sena demanded social organisations across the country to make sure that the movie can’t be screened.

In Haryana’s Gurgaon, Wazirpur-Pataudi road was blocked by protesters and torched a bus in Sohna. The administration has banned protests within a 200-metre radius of movie halls till Sunday. While in Gurugram, Clubs and bars will be closed from 7 this evening till further orders. Several cinema hall owners have denied screening the film Padmaavat.

Meanwhile, Police in Mumbai arrested 30 Karni Sena workers as a preventive measure; 44 others were arrested in Gujarat capital Ahmedabad.