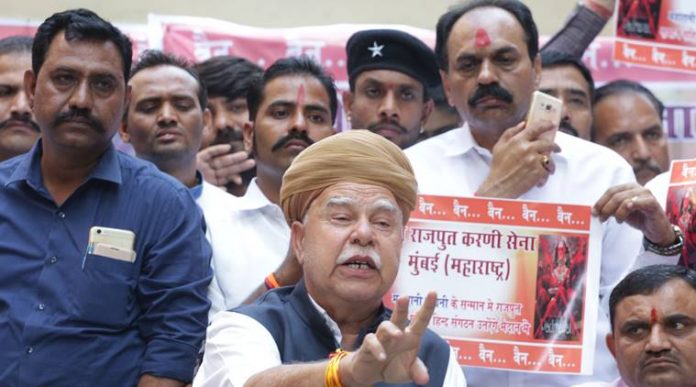 The group opposing the film ‘Padmaavat’, the Karni Sena has finally softened its stand agreeing to watch the film. The group said on Monday that they are ready to watch the film as offered by Bhansali productions to end the deadlock on the issue.

The film Padmaavat, which is now ready to hit the screens on January 25, has been facing protests by Karni Sena and various other fringe groups. They alleged that the makers of the film have distorted historical facts in it. On January 20, Bhansali Production had written a letter to Shree Rajput Karni Sena and Rajput Sabha, Jaipur, inviting them to watch the film assuring them that the film shows the honour and valour of the Rajput community.

Even though censor board cleared the film for theatrical release, it was banned by governments of Rajasthan, Gujarat, Madhya Pradesh and Haryana. Nevertheless, Supreme Court lifted the ban and paved way for the film’s release nationwide. Previously, Madhya Pradesh and Rajasthan governments moved to the Supreme Court for a recall of its January 18 order allowing the nationwide release of ‘Padmaavat’.

Meanwhile, protesters objected to the release of the movie Padmaavat and burned three buses. Protestors even damaged the window panes of at least six more buses in different parts of Mehsana district. While in Bhilwara, a youth climbed a 350 feet tall mobile tower with a bottle of petrol protesting against the release of Padmaavat. However, the youth got down from the tower, not before an assurance from the local administration that no case will be registered against him.

The film landed into controversy ever since the declaration of its cast. The Karni Sena and Rajput royal family even had objections about the portrayal of Rani Padmavati played by Deepika Padukone in the film.

Despite the filmmaker Sanjay Leela Bhansali’s on-record clarifications, the Karni Sena has been reflecting on the probability of intimate scenes in a dream sequence between Rani Padmavati and Sultan Alauddin Khilji played by Ranveer Singh. The producers have repeatedly denied the claims declaring there’s not even a single frame where Rani Padmavati and Khilji appear on-screen. Notwithstanding the producers’ assurances, Karni Sena chief Lokendra Singh Kalvi threatened a nation-wide mutiny should the film gets released in theatres. The Karni Sena went on to threaten CBFC chief, Prasoon Joshi to banned from entering Rajasthan since the latter gave clearance to Padmaavat.

However, now security has been beefed up across theatres in Gujarat, Maharashtra and Haryana owing to threats of demolition by groups opposing to the screening of the movie.