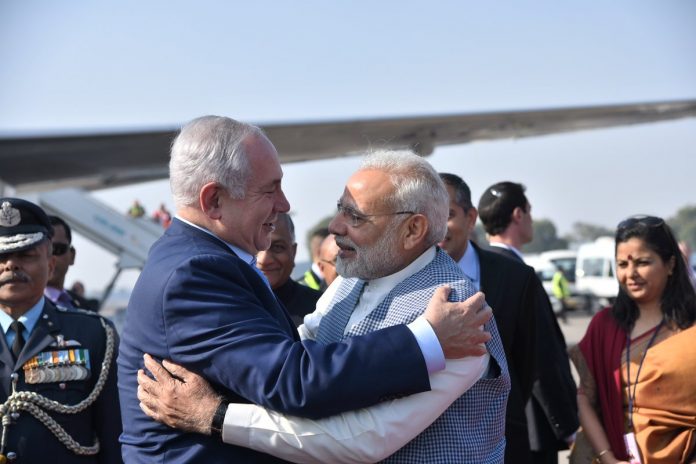 With an aim to further strengthen the bilateral relations, Israel’s Prime Minister Benjamin Netanyahu today arrived on a six-day visit along with the largest business delegation that has ever accompanied an Israeli premier on an overseas tour.

The leaders laid a wreath and signed the visitor’s book. The ceremony also marked the formal renaming of Teen Murti Chowk as the Teen Murti Haifa Chowk by the New Delhi Municipal Council (NDMC).

This is what Modi wrote in the visitors’ book-

“It is the 100th anniversary of the end of World War-1. Many golden pages of the sacrifices of Indian braves are written in the history of both World War. One of these pages was written 100 years ago, in the sacrifice of Indian soldiers at Haifa. The sacrifice commemorated at Teen Murti observes its centenary. Naming spot as Teen Murti – Haifa Chowk, marks this historic occasion. In presence of the Prime Minister of Israel, we pay homage to the brave soldiers. Salute to the great Indian traditions of selfless sacrifice and penance.”

ALSO READ: Baby Moshe to visit Chabad House where his parents were killed in 26/11

Netanyahu will be visiting Delhi, Agra, Gujarat and Mumbai and will be accompanied by the Indian Prime Minister on extensive portions of his visit.

The visit marks 25 years since the establishment of diplomatic relations between the two countries and takes place about six months after Modi’s trip to Israel, the first by an Indian prime minister to the Jewish state.

Netanyahu’s visit to India is only the second one by an Israeli prime minister and comes after a gap of 15 years.

Netanyahu will be visiting Delhi, Agra, Gujarat and Mumbai and will be accompanied by Modi on extensive portions of his visit, a press statement said.

Several MoUs, including in the field of oil and gas, renewable energy, amended protocol for airports, cyber security, and co-production of films and documentaries, will be signed between the two sides.

Israel’s Saare Tzedek hospital would be signing an agreement with the ministry of health and family welfare.

“This evening I am leaving on an historic visit to India. I will meet with the Prime Minister, my friend Narendra Modi, with the Indian President and with many other leaders. We will sign very many agreements,” Netanyahu said in statement.

“We are strengthening ties between Israel and this important global power. This serves our security, economic, trade and tourism interests, as well as many other areas. This is a great blessing for the State of Israel,” he said.

“Indian Prime Minister (Narendra) Modi is a close friend of Israel and of mine and I appreciate the fact that he will accompany me on extensive parts of my visit,” Netanyahu said just before leaving for New Delhi.