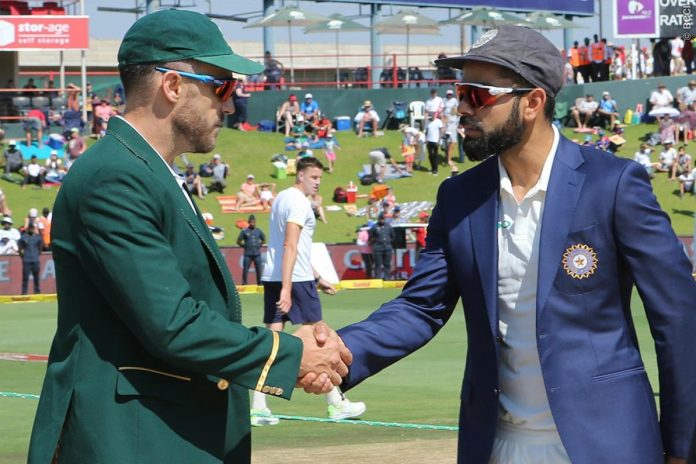 Centurion: South Africa have won the toss and asked India to bowl first in the penultimate second Test of the three-match series at the SuperSport Park here on Saturday.

Following the toss, Indian skipper Virat Kohli said, “No-brainer, we’d have batted as well. There seems to be a lot lesser grass. Day one first session is always tough for the batsmen but we wanted to take that challenge. We have a forced change.”

South Africa captain Faf du Plessis, on the other hand, said that the Centurion pitch looks a bit up and down, adding that they are expecting a big fight from India.

As far as Playing XI is concerned, the visiting side have made three changes.

Parthiv Patel has been included into the squad to replace Wriddhiman Saha, who is out with a hamstring niggle.

For South Africa, uncapped fast bowler Lungisani Ngidi will make his Test debut after veteran pacer Dale Steyn was ruled out due to a heel injury.

After slumping to a moral-sapping 72-run defeat in the opening Test in Cape Town to go down 0-1 in the series, India will look to bounce back to keep themselves alive in the series.

The world number one Test side will look to win this match if they want to become the first side in history to get to ten Test series win in a row with a victory over South Africa.

Meanwhile, India have also never managed to win a Test series on South African soil for the past 25 years. Their best result came during the 2010-11 series, which India drew 1-1.

South Africa, on the other hand, are riding high on confidence after their splendid outing in Cape Town and will aim to wrap the three-match Test series when they head into the second match.

It should be noted that South Africa had enjoyed a winning spree at Centurion like no other venue across this country with 17 wins and just two defeats.