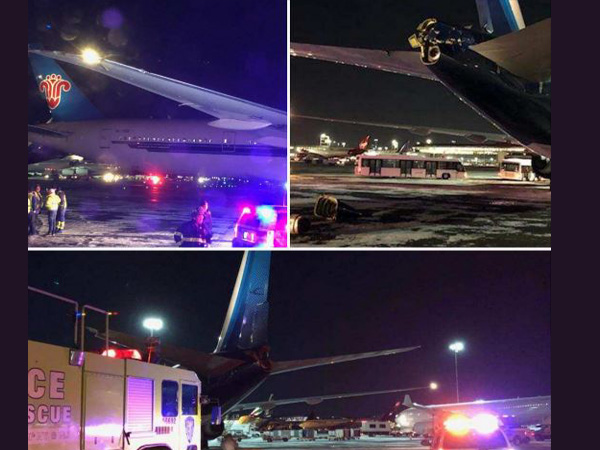 The Port Authority Police Benevolent Association, in a tweet, said that the right wing of the Chinese aircraft grazed the tail end of the Kuwait Airways vessel, causing damages to both the planes.

No passenger was on board the China Southern plane at the time of the collision, it is reported.

It added that Kuwait Airways passengers had safely disembarked and were shifted to nearby hotels.

Several passengers were stranded for hours at New York’s JFK Airport reportedly as an effect of the ‘bomb cyclone’ leading to halting of airplanes at the runways, earlier in the day.

Passengers aboard Air China, who were stranded for hours at the airport tarmac, deplaned after getting a small respite from the travel chaos.

Massive delays, walls of people in terminals, complaints of hours-long waits to get to a gate after landing, then hours more to get checked baggage were some of the cries of the stranded passengers, who took to the social media, to vent out their anger.

Earlier, a passenger aboard Air China, tweeted, “We need help still on plane have been traveling since Thursday New Zealand Time @AirChinaNA @JFKairport @united almost 6 hours. Not enough stairs to deplane. We will expect FULL refund. #ca989 it’s 5:30 in the morning!!!!!!!!! @ColeHaber.(sic)”

JFK had closed down on Thursday at 11 am when the storm hit and reopened on Friday at 7 am.

“I have never seen that before! Landed at 10:25pm JFK airport, still in the plane at 3:50am after an 8h flight from Paris. We cannot get out, insane! #AirFrance #jfkairport,” one of the passengers aboard Air France tweeted.

“Still waiting at terminal 1 for flight AF008 luggage, no food no water no wifi for 9 hours. Shame of a service. @NYGovCuomo” said another passenger.

“2hours delayed at cdg, 8h flight, 4h waiting for parking spot, 1h for staircase, 1h to remove snow at the terminal door, 1h for boarder controls and still waiting for luggage since 5am without food or water or any airport staff #thisisnyc #jfk @airfrance” came another tweet.

Another frustrated passenger tweeted, “Due to excessive flight delays, my new permanent address is JFK Airport. Please forward all my mail to Terminal 4, c/o @Delta.”

“@JFKairport. we landed 5 hours ago & are still waiting on luggage at baggage claim! Not a single staff member to be seen, no announcements made about what to expect. All after being stuck on the tarmac for 3+ hours waiting for a place to park. Unacceptable customer service!” one of the passengers tweeted.

Many were reported to be waiting for hours at the baggage claim after getting off the plane.