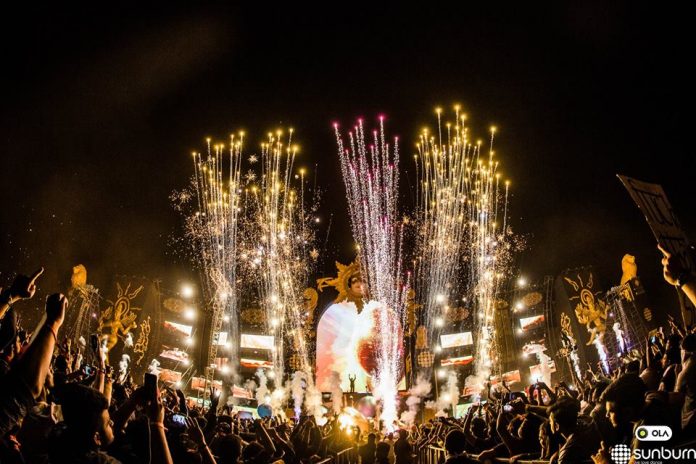 In what we can call an amazing night, Sunburn was highly enthralling on its third day. There were performances by many artists, whose names are DJ Chill, Progressive Brothers, Anish Sood, Clean Bandit, Nucleya and Kshmr.

The musical crescendo raised on the penultimate day of  ‘SUNBURN FESTIVAL 2017’ as KSHMR kicked off his set with the official SUNBURN 2017 anthem, ‘ SHIVA’ composed with THE GOLDEN ARMY. The track features Indian musical elements including a vocal sample in an Indian dialect fused with a psytrance beat. The anthem has tribal influences along with a dash of Indian flare. It is pulsating with energy, creating excitement for this year’s Sunburn festival.

The sound system was up to max, lights on full blast and the headliner on the Main Stage who was recently crowned the best LIVE act of 2017 at the DJ Mag awards, KSHMR kicked things off for the closing set and had the festival goers in full fist-pumping euphoria. What followed was a relentless, sensory assault for the next hour.

Big track after big track, hints of past hits emerging then disappearing into the next before returning in full voice later in the set. Builds, drops and riffs set to synchronized lasers and ear-popping fireworks all pummeled rapturous festival goers who erupted as old favourites and new bangers were greeted with cheers and balloons flying through the air.

Earlier, the audiences were left in awe after witnessing scintillating gigs by India’s EDM star NUCLEYA as he hijacked many hearts with his desi bass gigs. Nucleya performed on Akkad Bakkad, Bass Rani and Laung Gawacha and spiced up the scene when he asked Punekars “Scene Kya Hai?” to which they roared – Sunburn. After two days of the musical feast, the hunger for music only got higher as ” Sunburn’ites” tapped their feet to some of the exclusive lineups and smashing sets on the third day of the festival.

The tempo climbed the ladder in the end as KSHMR made the audience pump up in the air with some of the all-time favourite Bollywood numbers. Day 3 truly had a blend of “Desi” and “Vilaiti” flavour to it.

After DJ Chill kicked off with the classic house, Hip Hop and R&B tracks, the crowd started mushrooming at the Mainstage as they waited for their favourite artists. The line up on the main stage just got bigger and bigger with Delhi’ s most celebrated progressive house , techno house artists – PROGRESSIVE BROTHERS rolled their fingers on the disc building the right atmosphere for the concluding acts , they were followed by another Desi Techno crank, Anish Sood who played in the backdrop of the sun setting in the mountains.

As the Sun dipped and the cold breeze blended with music, it was time for rolling of drums and some classical pop music and as they say ” you think it – Sunburn has it ! “. The British electro-pop group – CLEAN BANDIT took the centre stage. As the bands’ vocalist Jess Glynne started with some of the popular tracks like ‘Rather Be’, ‘ Take Me Home’ ‘ Hold my Hand’ the atmosphere got mystical in no time!

OLA Stage featured artists like ZENITH, NDS, WILL ATKINSON among the others who left no stone unturned to infuse the audiences with EDM dose for their soul. The Italian electronic scene was bubbling ferociously on Stage 3 with some incredible talent by none more so than Turin based Luigi Rocca. The self-made producer and global travelling DJ who also ran three of the most exciting record labels – Hotfingers, Tuamotu and 303Lovers – alongside Manuel De La Mare and Alex Kenji managed to forge a successful crowd dancing to the beats of his tracks.

The lineup for Day 3 was undoubtedly the biggest among all three days, and the madness on the first two days had set up the stage perfectly for the closing day of the marvellous Sunburn Festival’s 11th edition.