The speech that was ‘unheard’ in Rajya Sabha gets delivered on social media | Newsmobile
Friday, October 7, 2022

Home Home Slider The speech that was ‘unheard’ in Rajya Sabha gets delivered on social... 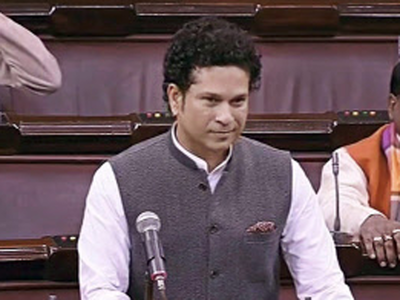 Plenty has been said and written about Master Blaster Sachin Tendulkar’s role and involvement in Rajya Sabha. Ever since he was nominated, he was dragged into this political environment.

And it was an utter shock when the Bharat Ratna was not allowed to speak in the upper house when he tried to so on Thursday. But Master being the man he is, he left the ball in swinging condition before unleashing his shots when the movement seized.

The batting Maestro took to social media to share a 15-minute video where he sent the message of transforming India from being a sports loving nation to sports playing nation.
Here’s the full video of the ‘God’

It is my endeavour to transform India from being a sport loving nation to a sport playing nation. I urge you all to participate in this effort and help make my dream, our dream. Always remember, dreams do come true! Jai Hind🇮🇳 https://t.co/h6l3Iq5lHT

Tendulkar talked about his vision of a healthy and a fit India. He went on to say that being a sportsperson, he would talk about sports, health and fitness, for it has a telling impact on India’s economy.

Tendulkar raised the issue of India being the diabetic capital of the world with over 75 million people affected by the disease, and when it comes to obesity India is at number three spot in the world and the economic burden of these diseases will not allow the country to progress.

He emphasised on building a sporting culture in the country, otherwise a young, unfit, unhealthy India will be recipe for disaster. He went on to propose a framework of three ‘I’ – Invest, Insure and Immortalise. “We must invest our own time and effort and ensure our wellness and each one of us must to start adopting one active sport and play regularly,” said Tendulkar. “Our citizens and school children should have access to more sports infrastructure. Open spaces and playgrounds should be retained and along with smart cities, we should look at building smart sport cities,” he added.

He has received huge support from sportstars and other celebrities alike.
Here are some of them in support of Sachin Tendulkar-

Completely agree with you, Sachin!!
With you absolutely, in your ENDEAVOUR!! @sachin_rt https://t.co/Ly6V2DfZqw

Words of wisdom by the master himself. Thank you @sachin_rt for being an inspiration yet again to the millions of fellow Indians out there. 🇮🇳📢
I truly believe in your thoughts & we need to come together collectively to bring this change!
More power and love … https://t.co/A6axxLbzb7

Inspiring words , as always. May this come true and may we all contribute in making this happen . https://t.co/fTA8PT0BkG

An important speech by @sachin_rt on the necessity of creating a sporting culture in the country. https://t.co/G6rReZ5Kyi

“Let’s build a sporting culture in India & transform the way we live & play.”

Let’s join @sachin_rt and work towards fulfilling the dream of a fit and happy India 🇮🇳 https://t.co/ctTpLjLEz6

He speaks from his heart and if @sachin_rt sir has a dream then India must help fulfill it… every child must have a chance to play and learn and every parent should support and allow the children to dream…India must play !!! https://t.co/432X4P0a9M

And there were plenty of others as well.

Probably politicians didn’t do their homeworks. You can trouble the master but cannot stop him, ask Shoaib AKkhtar, Shane Warne and others.