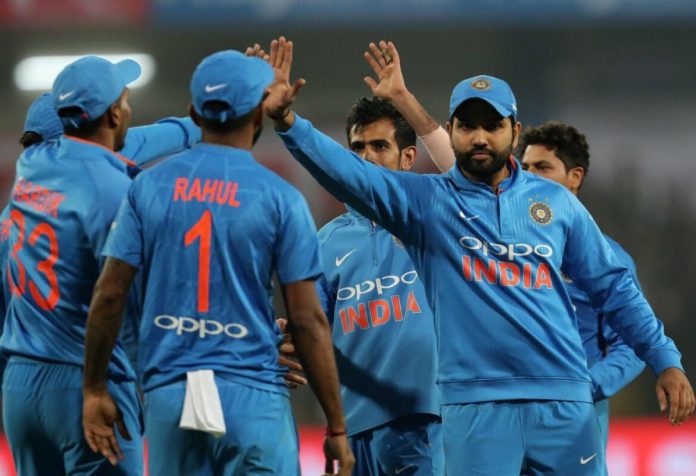 Riding on another superb performances from spinners and a magnificent century from skipper Rohit Sharma, India crushed Sri Lanka by 88 runs in the second T20I at the Holkar Stadium to gain an unassailable 2-0 lead in the three match series. The win meant that India finished the year without losing a single bilateral series, winning 12 of the 13 series played, 1 was tied.

It all started with Thisara Perera winning the toss and opting to bowl first in search of dew later on. They were left with too much in the end for dew to leave any impact.

The bowlers didn’t complement the skipper’s call as Indian opener Rohit Sharma and KL Rahul, especially Rohit, mercilessly hammered them. After adding ‘just’ 59 runs from the powerplay, the duo added 165 in just 12.4 overs before Rohit Sharma departed after doing a lot of damage. His 2nd T20I ton, which included 10 sixes and 12 fours, was cut short by Dushmantha Chameera after ‘Hitman’ had scored 118 from just 43 balls.

His century came off 35 balls, which is the joint fastest record for quickest ton in T20I. He shared the record with David Miller.

ALSO READ: The speech that was ‘unheard’ in Rajya Sabha gets delivered on social media

Rahul then went on to scored 89 before being dismissed for 89 from 49. Dhoni was cleaned up after adding 28 from 21 and Hardik Pandya scored 10 from just 3 balls as India posted their highest total of 260-5 from 20 overs. Had it not been for some good bowling in last over by Thisara Perera, who had earlier conceded 4 back to back sixes, India would have well broken the record for highest total(263 by Australia and RCB).

While Perera picked up 2 wickets for 49 runs, Nuwan Pradeep conceded 61 to pick same number of wickets.

Chasing an improbable target of 261 to level the series, SL got a solid start. Niroshan Dickwella scored 25 from 19, Upul Tharanga added 47 from just 29 balls and Kusal Perera fiercely struck 77 from 37 balls as Lanka raced to 145/1 from 13.1 overs. But that is when any chance of a surprise was seized. Indian spinners came back strongly to break the visitors. It took Chahal and Kuldeep Yadav just 15 balls to send back 7 batsmen, yes you read that right, as SL were reduced to  172/9. Within 27 runs Sri Lanka had lost all their warriors except Angelo Mathews, who didn’t come out to bat after pulling hamstring.

As a result, Rohit Sharma won his second successive match as the incharge of Indian T20 side.