According to the statement former Prime Minister Manmohan Singh in an unusual combative response called for the Prime Minister’s apology and said: “I sincerely hope that Prime Minister will show the maturity and gravitas expected of the high office he holds instead of concentrating his energy solely on erroneously conceived brownie points.”

“Sadly and regrettably, Mr Modi is setting a dangerous precedent by his insatiable desire to tarnish every constitutional office, including that of a former Prime Minister and Army Chief,” the former PM said in his statement. “Fearing imminent defeat in Gujarat, the desperation of Prime Minister to hurl every abuse and latch on to every straw is palpable,” he added.

Manmohan Singh added saying “needs no sermons on nationalism from a party and prime minister whose compromised track record on fighting terrorism is well known… Let me remind Narendra Modi that he had gone to Pakistan uninvited after the terrorist attacks in Udhampur and Gurdaspur. Let him also tell the country the reason for inviting the infamous ISI of Pakistan to our strategic Air base in Pathankot to investigate a terror attack that emanated from Pakistan.”

Addressing a public rally on Sunday in Gujarat, PM Modi had raised the Mani Shankar Aiyar dinner and suggested that the Congress was conspiring with Pakistani leaders to prevent the BJP from winning the election in Gujarat, where the party has been in power for 22 years. PM Modi also said a former Pakistan Army officer has supported senior Congress leader Ahmed Patel becoming chief minister of Gujarat.

“(On one hand) Pakistan Army’s former DG is interfering in Gujarat’s election, on the other, Pakistani people are holding a meeting at Mani Shankar Aiyar’s house,” PM Modi said. He alleged that a day after the dinner, Mr Aiyar targeted him with the “neech” slur. 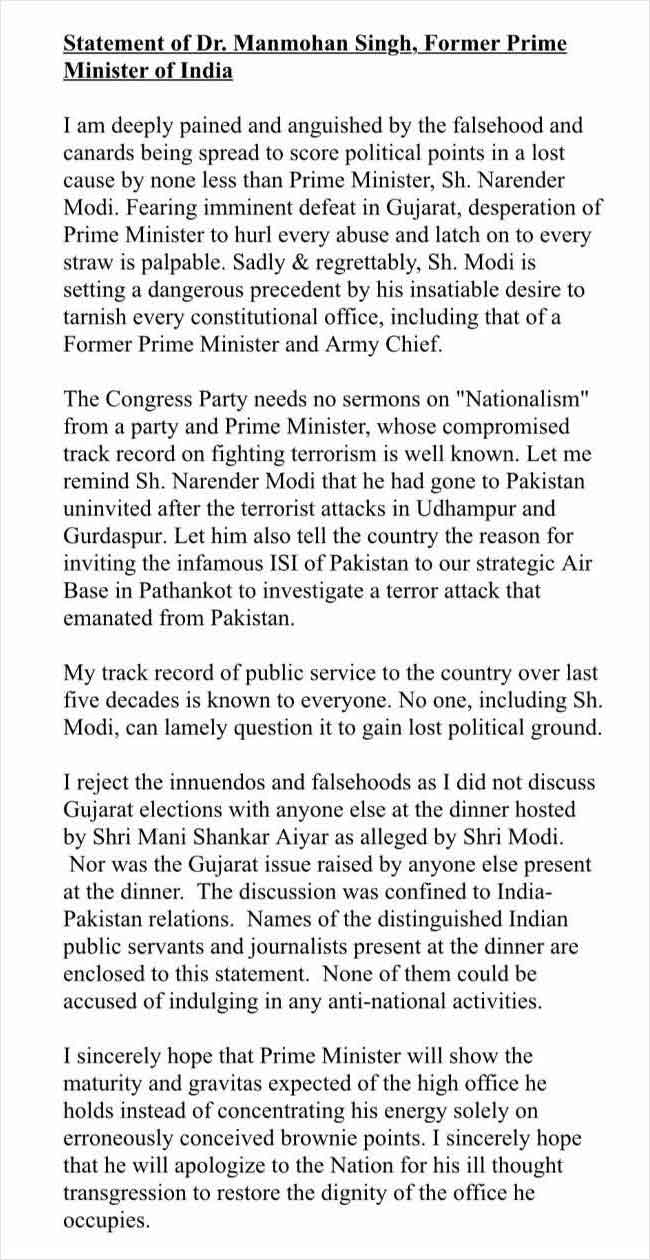