Wearing the Indian jersey, Pink actor, Taapsee Pannu stands upright in a hockey field. The still is from the shooting of her upcoming film opposite Diljit Dosanjh titled Soorma. Helmed by Shaad Ali, Soorma is based on the life of hockey legend Sandeep Singh.

While we have seen Diljit Dosanjh’s portrayal of Sandeep Singh earlier with the release of the first look and poster of the film, this is the first time we see Taapsee in her Soorma gear. And she has managed to get us intrigued, as always. Though the picture has been taken to showcase Taapsee’s back, her plaited hair, 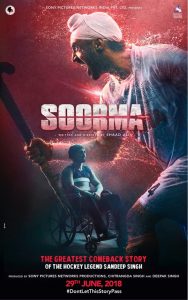 While the film isn’t a biopic, it explores an important chapter of Sandeep Singh’s life. While the exact details are still unknown, the film is set to be directed by Shaad Ali.

Taapsee and Diljit also went through extensive hockey training before they commenced shooting for the film in Punjab in October. With a stellar cast like this, we are sure that this project is something to watch out for.

The movie will hit screens in June 2018.