Yes, the much-awaited film 2.0 in which the khiladi Akshay Kumar co-stars with Rajinikanth will now hit the screens next year in April.

2.0 was initially scheduled to release on Diwali 2017 but the release date was forwarded to next year due to impending special effects work. Earlier, there were reports that it will be Akshay vs Akshay on Republic Day, 2018 as Akshay’s Padman hit the screens on January 26 next year. But the actor cleared all rumours and said that:

“There is a lot of false information that is being circulated over both films releasing on the same day. Why would I clash with my own film?”

The makers of the film of the film, which have made the wait a little tad-bit. Akshay will reportedly have 12 different looks for the movie. Rajinikanth reprises the role of Dr Vaseegaran and his creation Chitti the Robot in the sequel to 2010 blockbuster Enthiran. 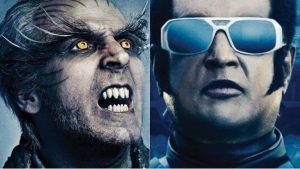 2.0 is also being reported by many as Asia’s most expensive movie so far with a budget of INR 400 crore.