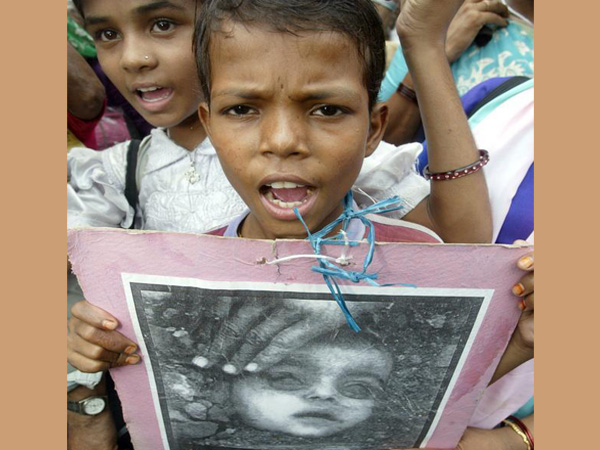 It’s been 33 years today to the Bhopal Gas Tragedy that killed hundreds in the capital of Madhya Pradesh but, the victims and their families are still crying foul.

The tragedy that struck the Bhopal city three decades ago occurred on the intervening night of December 2 and 3, 1984.

Even after 33 years, the toxic waste lying in the defunct Union Carbide is yet to be disposed off.

The victims of Bhopal gas tragedy are still complaining of not being provided with proper medical facilities, better living conditions and employment.

Bhopal`s third generation, born after the disaster that took place in 1984, is also suffering from related ailments.

There are children who cannot sit or speak or hear, while many women have gone sterile.

“It is 33 years since the gas tragedy took place but we are still facing problems. We haven’t even received any kind of help from the government. The ministers in Bhopal do not care about us. They are busy in having fun,” said a victim.

They paid homage to those who lost their lives in the calamity at the memorial statue in front of the now-defunct Union Carbide factory.

“Besides giving an ex-gratia of Rs 25, 000 we were not given anything. We are not even provided free treatment in hospitals,” said another victim.

“Even after 33 years, the condition of the victims of Bhopal Gas Tragedy is the same because both the negligence of Central and the State governments. Till today not a single person or organisation has gone to jail for the mass murder”, said an activist.

However, the Madhya Pradesh government has organised a half marathon today which has received widespread criticism by both the activists and victims.

Toxic Methyl Isocyanate gas which leaked from Union Carbide’s pesticide factory in 1984 claimed over 3,000 lives and maimed thousands within just a few hours.