Home Home Slider Reconstructing Pradyuman murder, CBI takes student to knife shops, school
ShareTweetGoogleWhatsappPrint
Mail
NEW DELHI:  A 16-year-old schoolboy accused of slitting the throat of Pradyuman Thakur, his junior at the Ryan International School in Gurgaon, was today taken to knife shops and will also be taken to school as a CBI team tried to reconstruct the murder.
The CBI questioned the Class 11 student in custody for six hours before taking him to select shops to find out where the murder weapon, a knife, may have been bought. Sources say in the next two days, he will be taken to his school so he can retrace his steps on September 8, when seven-year-old Pradyuman was found murdered in a toilet near his classroom.

Investigators have told a Juvenile Court that the teen confessed to the crime in the presence of his father, independent witnesses and a social welfare board member. The motive, apparently, was to delay an exam, but the CBI is yet to find clinching evidence.

The agency, for the first time investigating a child for another child’s murder, was yesterday granted custody of the student for three days.

Pradyuman, a Class 2 student, was found murdered some 15 minutes after he was dropped off by his father, along with his older sister at 7.55 am. 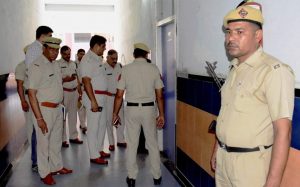 Seven hours later, the police told the media that they had the killer. Schoolbus conductor Ashok Kumar, they said, murdered Pradyuman after trying to sexually assault him. They claimed that they had recovered the knife from him.

After committing the crime, the CBI says, the teenager flushed the knife down the pot. But no forensic evidence links him to the weapon so far.
ShareTweetGoogleWhatsappPrint
Mail