Makers of Saaho unveiled the first look poster of the film on Prabhas’ birthday on Monday. Cashing in on the actor’s pan India appeal, the makers have launched the first poster from the film as a treat to Prabhas’ fans across the country. The film also stars Shraddha Kapoor.

Saaho’s first look poster showcases a mysterious Prabhas in a mask covering his face that serves as a perfect tease to the masses. Against the backdrop of skyscrapers and a crime scene like set up, Prabhas is seen leading a poised walk. 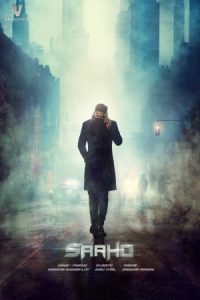 The mystique poster further raises anticipation levels by keeping the viewer guessing about Prabhas’ character and the genre of the film. Six months after delivering India’s biggest blockbuster Baahubali, Prabhas is back with his upcoming trilingual Saaho. The makers had made a sensational announcement of Saaho in late April this year by treating the audience with a phenomenal teaser of the film.

The film has been written and directed by Sujeeth and the film will hit the screens next year. The film is being shot simultaneously in Hindi, Telugu and Tamil. Saaho is expected to deliver a triumph of scale, size, and spectacle. A UV Creations production Saaho, produced by Vamsi and Pramod and directed by Sujeeth – is being filmed at striking locations in, around and outside the country. Music by the awesome trio of Shankar-Ehsaan-Loy and lyrics by the very talented Amitabh Bhattacharya, are sure to jazz up our playlists.

Also, while everyone is going gaga over the first look of Saaho, Prabhas’ favourite director SS Rajamouli had a special observation to make. He tweeted: “Beautiful usage of colours and textures.. Super Stylish Saaho.. #SaahoFirstLook.”