New Delhi: With just 10 minutes remaining in India’s second Group A fixture against Colombia at the packed Jawahar Lal Nehru Stadium in New Delhi on Sunday, the football fans across the nation were hoping for something that nearly two FIFA U-17 World Cup matches had yet to yield – a goal from the tournament hosts.

Trailing 0-1, India won a corner on the right-hand side. It was from that set-piece that midfielder Jeakson Thounaojam rose to head home and create Indian football history. 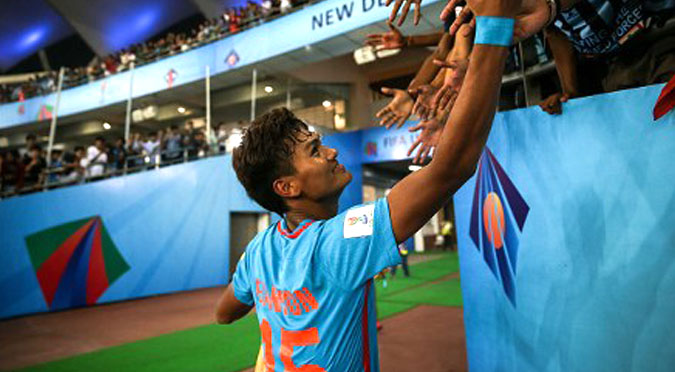 His short-lived equaliser brought delirium to the New Delhi crowd, but before they could fully savour that special moment, Colombia’s Juan Penaloza struck again a minute later to put Colombia back in front for good, as he slid home after taking a pass off the chest from Gustavo Carvajal. The goal also dashed hopes of the Indian fans who were expecting that a well-earned result could be achieved.

“I am extremely happy. I want to thank my teammates for giving me the opportunity to score the goal. It’s a great feeling for me,” said Thounaojam, a national team reject.

The 2-1 defeat to the South Americans was harsh on India, whose spirited effort earned plenty of plaudits from local fans and media alike.

ALSO READ: Your complete guide to the FIFA Under-17 World Cup

The Amarjit Kiyam-led side, which lost their opening game 0-3 to the United States of America on October 6, will now face Ghana in their last Group A fixture on October 12.

Elaborating about the team’s preparation for their last group fixture against Ghana, the 16-year-old midfielder said that they will fight till the end like they have done in the last two games.

“We will play with the same intensity which we displayed in the last two games and will fight until the end,” he insisted.
(with ANI inputs)