The much awaited Audi A-8 sedan was spotted testing in Mumbai, Maharashtra.

The predictions are that we will be seeing the new Audi on India’s roads by the end of 2018 and the cost is said to be more than Rs. 1 Crore. 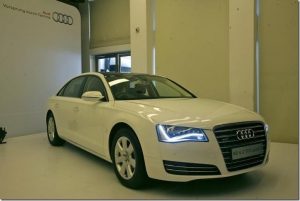 While the Audi that was spotted was seen having Audi’s four rings logo and also what appears to be the Quattro badging, though it did not have the A8 badging. The distinctive OLED tail lamps of the car made us sure about the fact that this is the brand new Audi – Sedan.

Currently in its fourth generation, the new Audi A8 now comes with an all-new exterior design language and an ultra-luxurious cabin with a premium interior that has huge impetus on future technology and connectivity. 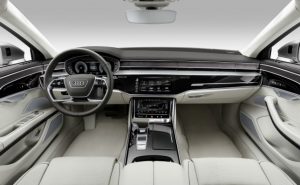 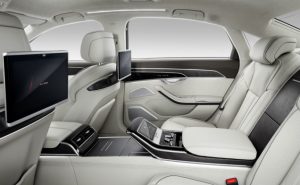 Visually, the new Audi A8 sedan has gone through a sea of changes compared to the previous generation model. Based on the Prologue concept that was shown in 2014, the new-gen A8 gets a new front end design with a large single-frame grille with chrome surround and laser headlamps. The new A8 also gets a very distinct front daytime running light design combined with the matrix headlamps. 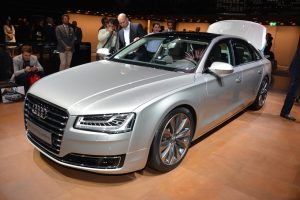 The interiors of new Audi A8 are minimal and futuristic. The cockpit design is quiet distinguishable and it comes with a very horizontally oriented dashboard that comes with a glossy black surface complemented by a high-mounted wood accent piece that runs across the dashboard and into the side panels.

The Audi A8 will come with a range of 6-cylinder petrol and diesel engines. The new A8 will also get a hybrid or electrified version sometime in the future.