Kolkata decks up like a bride for the days 10 days for Durga Puja. Be it themed pandals or music being sold as Puja special, there is symbolism everywhere. Most magazines bring out puja specials with covers that depict the goddess in myriad dramatic designs. Have a look at some of the cover art from this year, 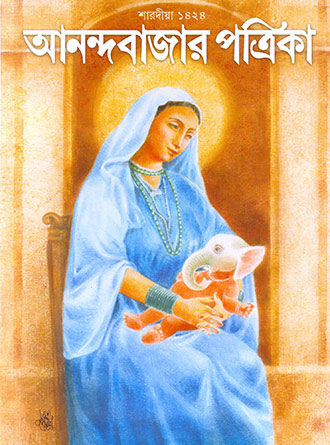 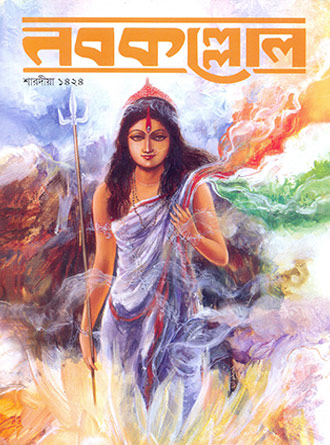 This year has been no different from the others for the city, starting with the longest alpana design on the streets – 1.2 km long on Lake Road – which caught the imagination of the media overnight as kids from the Government College of Art worked through the night to make it come alive! No one can fault it’s beauty and it is a sight to behold.

Students from the College of Art in #Kolkata paint Lake Road into over 1 km-long stunning #alpana#DurgaPuja2017 pic.twitter.com/M1wWBMQMEu

It took 400 students and volunteers to make it come alive on the morning of Mahalaya when everyone in Bengali household wake up at the crack of dawn to listen to Chandipaath on radio or television. This year when the residents work up and went to their balconies, this is the sight that greeted them,

Also Read: Durga Puja shenanigans: What to expect when you go pandal hopping 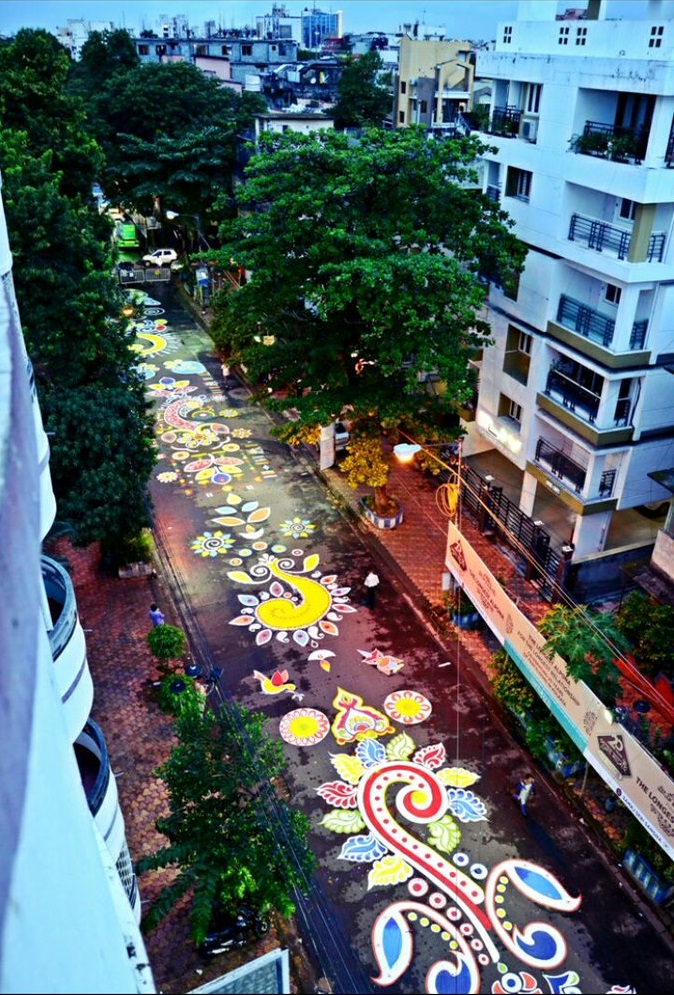 This was on the first of the 10 days of Durga Puja.

The idols are made by traditional artisans in north Kolkata’s Kumartuli area. The base is made from husk and then layers of clay is molded on the structures on which features are carved in the end. On Mahalaya, the eyes are drawn on the idols to make them ‘come alive’. 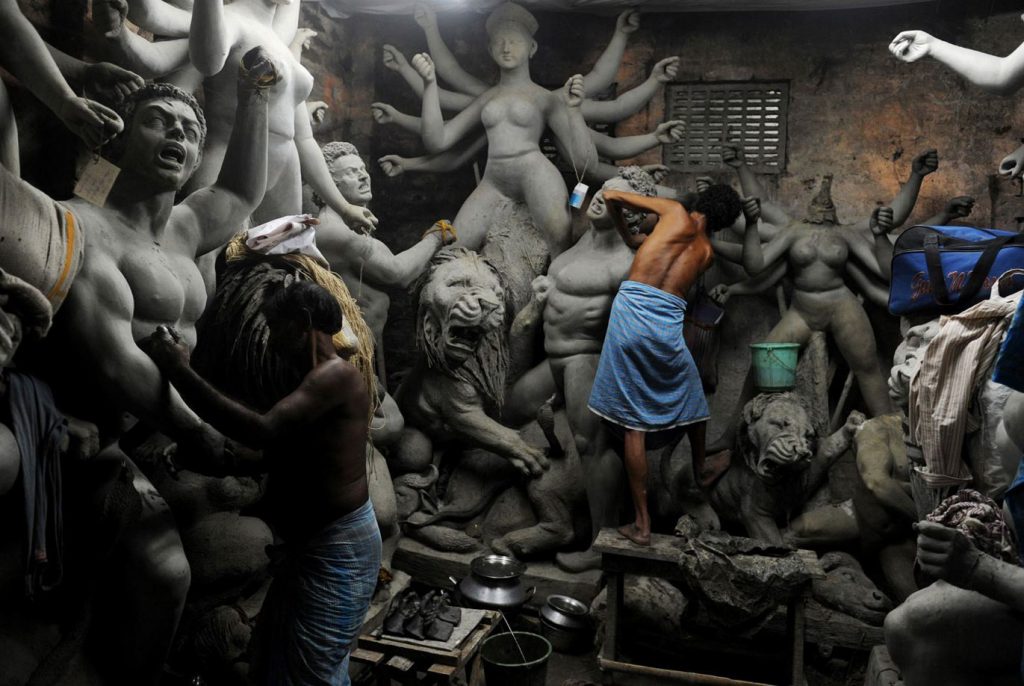 The idols also hide a whole world of symbolism in them. The idols are often dressed to reflect what’s trending in the society. The same is true for the pandals that are themed to reflect what is latest in news or designed to look like a place described in a well-loved story for example, Hogwart’s a few years back when Harry Potter was at the peak of popularity or as is the case this year as Mahishmati from the famous movie, Bahubali that broke all records last year.

Here’s a glimpse of the Bahubali-themed Durga Puja pandal. 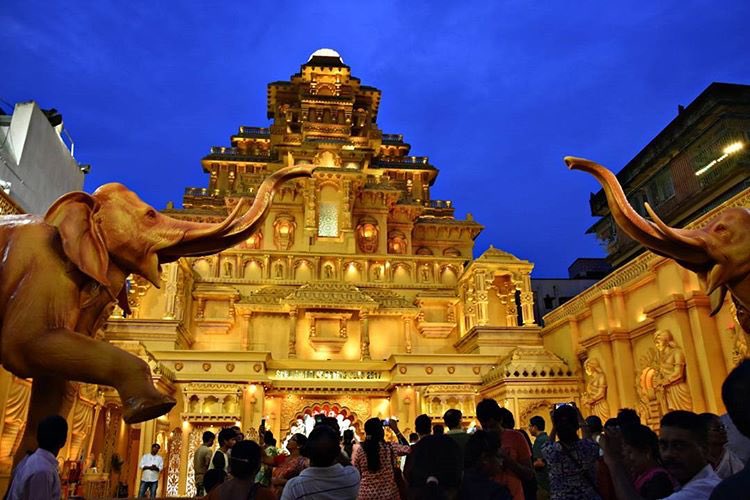 This year also saw a replica of the famous white temple of Thailand being resurrected in Kolkata. 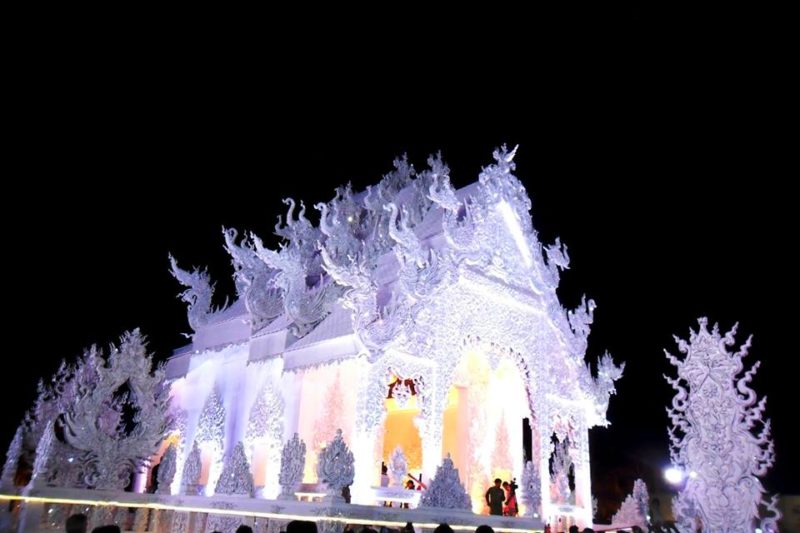 Then, there is the pro-nature pandal which makes any expensive Hollywood film set fade in comparison in terms of set design. 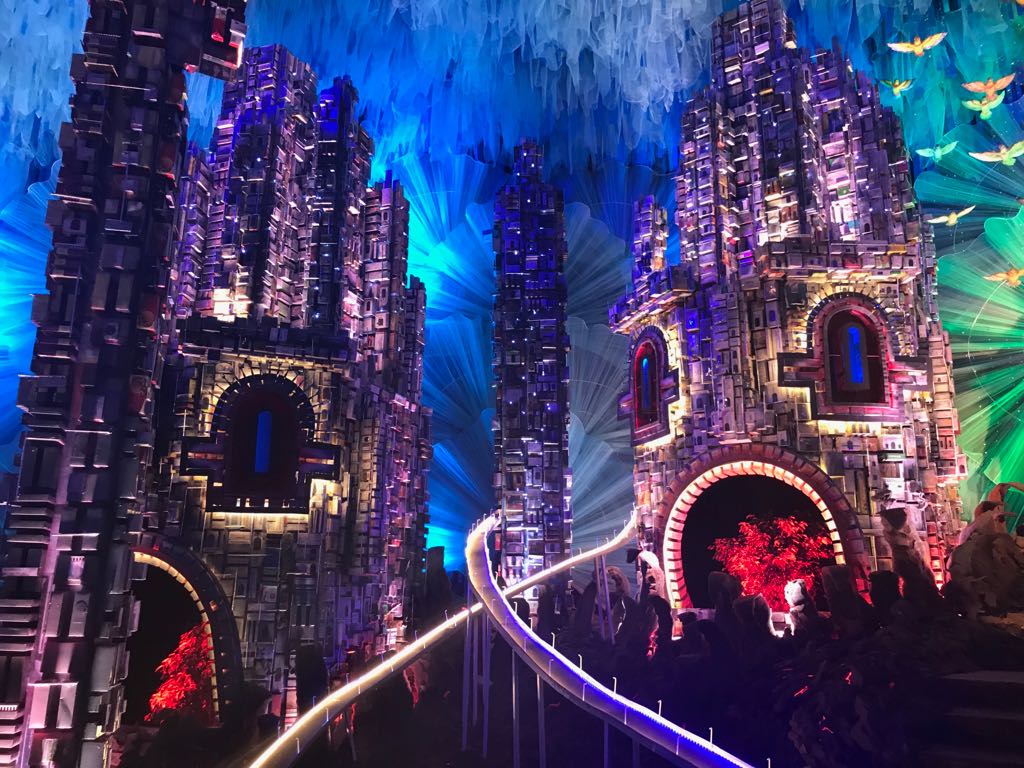 The idol too looks more like mother Earth than Ma Durga. 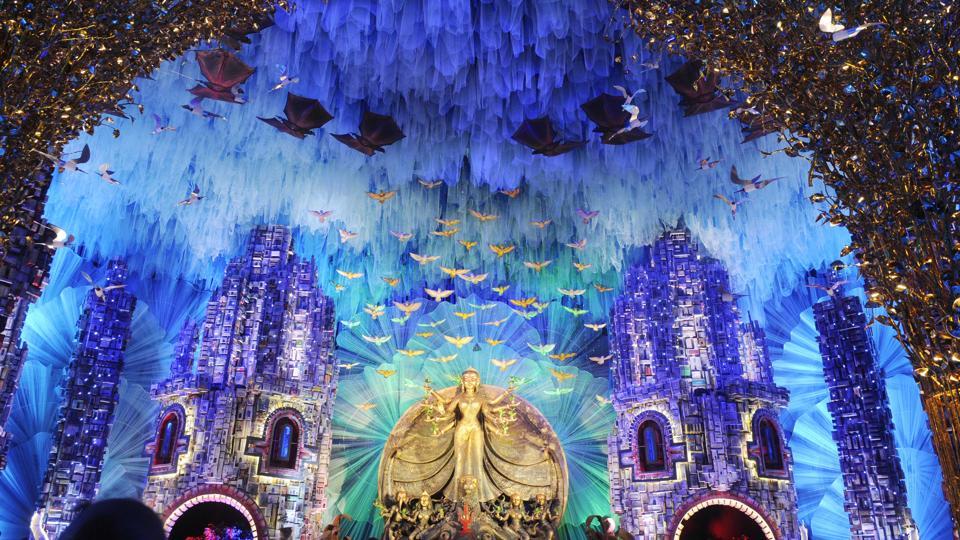 If environment is not your message then, there are more. Here’s one for the music lovers, 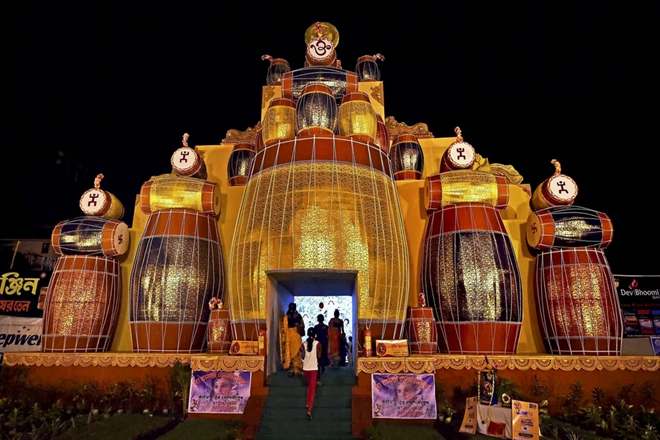 If it is alcohol you want to leave. Then head here, 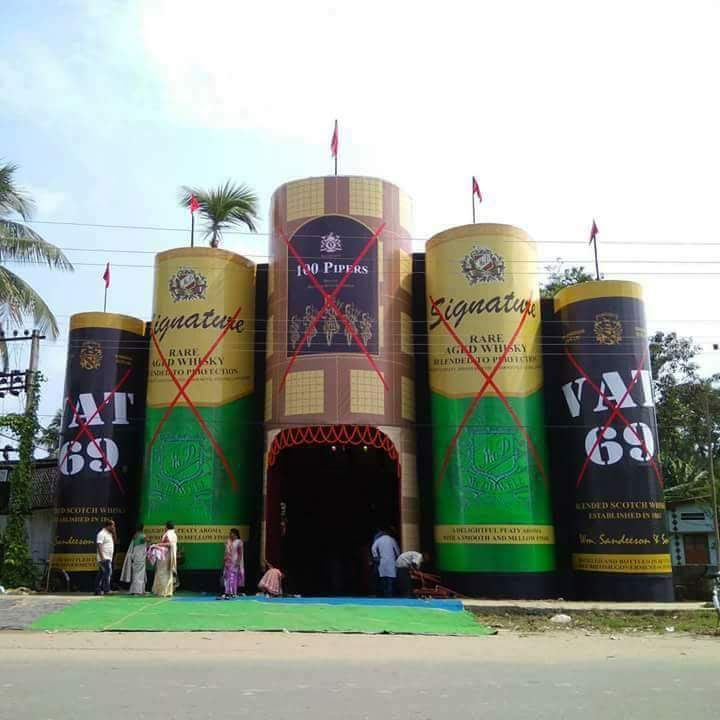 If you still want more like most mortals, here is some more.

Also Read: Time to work on the festive look

This one depicts the circle of life, 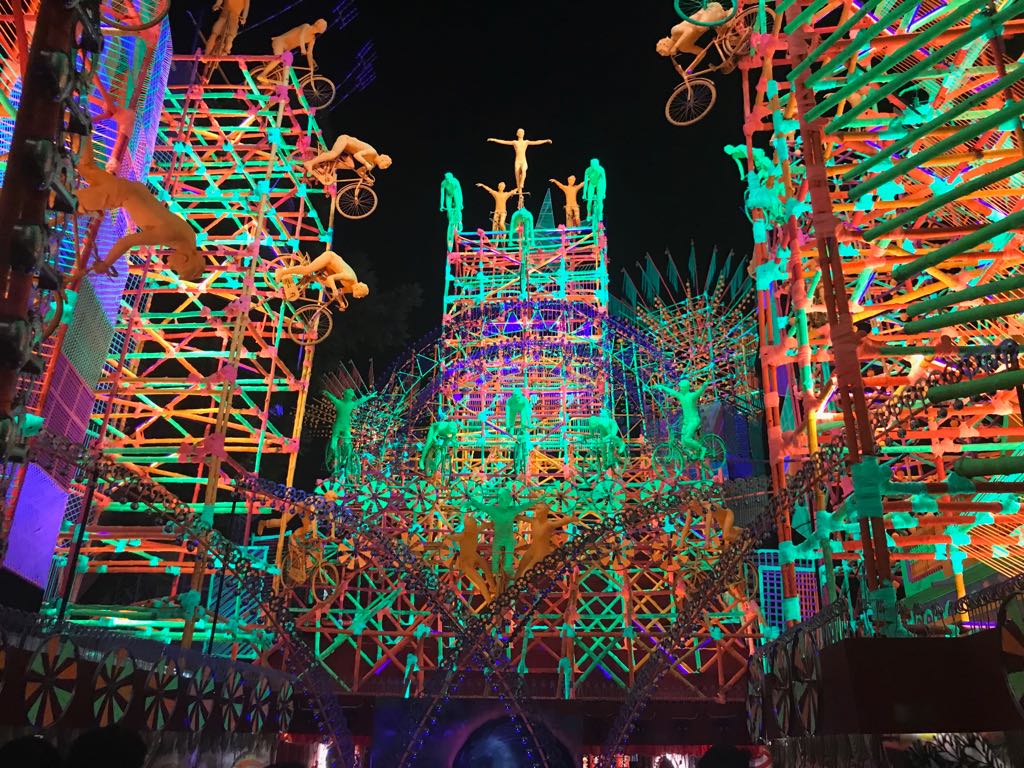 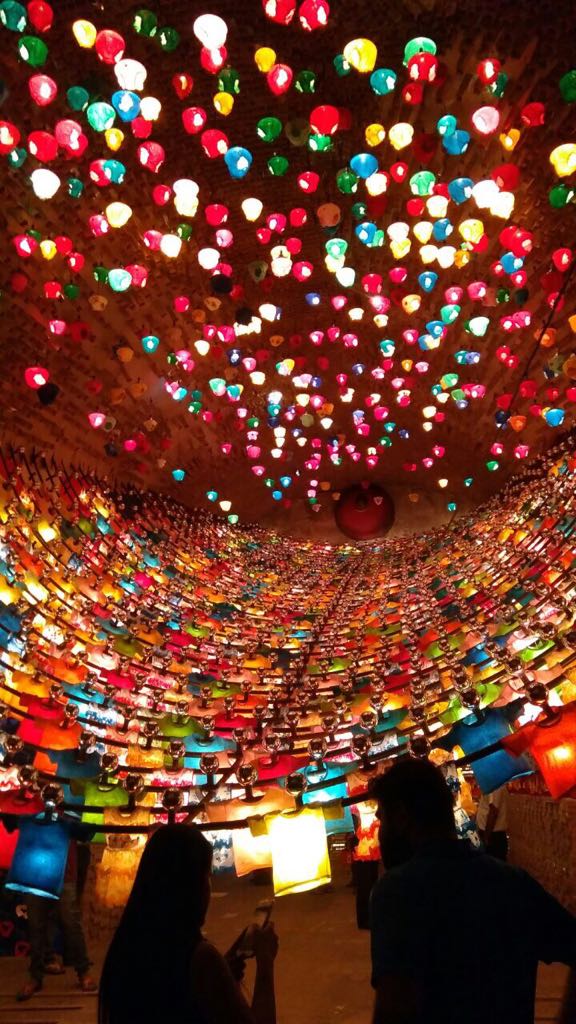 This one is a submarine themed pandal. 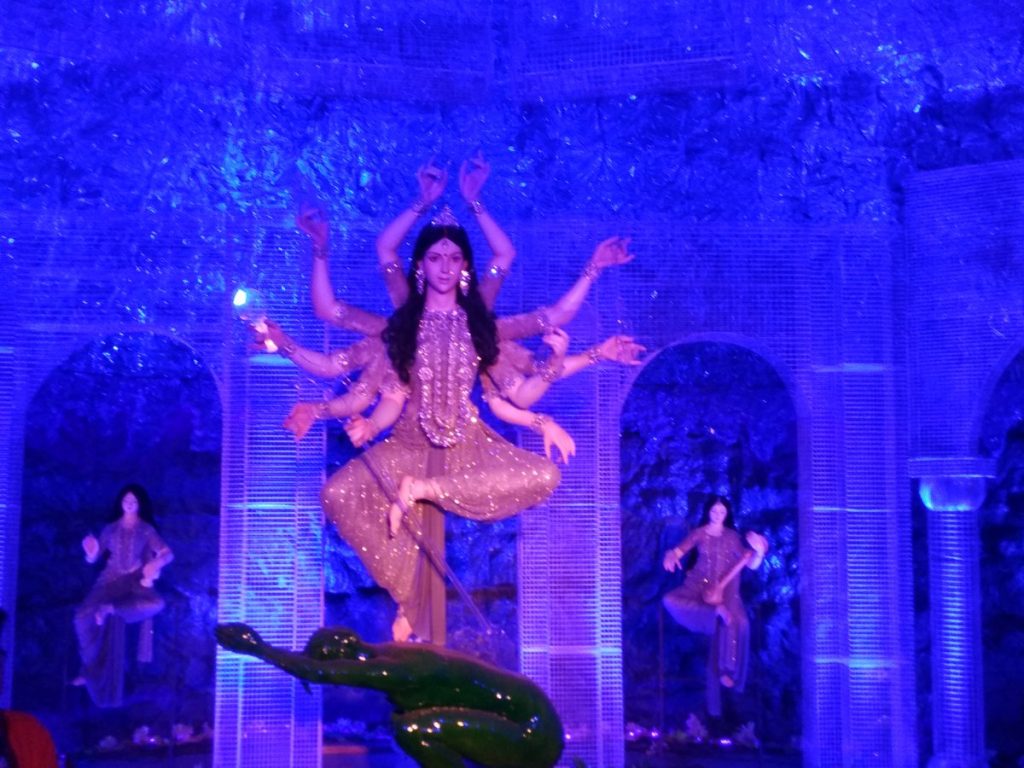 Finally, here’s the Big Ben in Kolkata because it will not ring for the next four years. 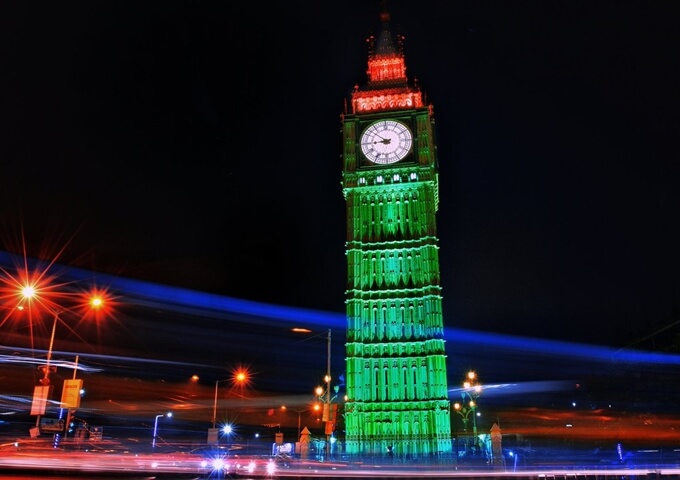 There are more people on the roads in these five days than can be imagined. Everyone dressed to the nines and there is a general feeling of bonhomie that crackles the atmosphere.

There is food, there is music, there is laughter on the streets.

Lighting is another attraction that make the city look part-celestial. Fairy lights on the roads, twinkling floats and huge floodlights that are used to focus on the idols – all probably make the city visible from space.

Dashami or the 10th day of the Puja is also full of excitement with Sindoor Khela in the morning and then, the spectacular visarjan in the evening.

If you love to party and are not easily fatigued, then this is the time for you to join in the celebrations if you can book a hotel for the next few days.