The airlines affected were British Airways, AirFrance, KLM and Lufthansa. It was the latest IT problem for BA, who insisted the glitch was not connected to previous outages. 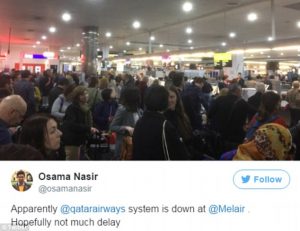 The problem was described as a ‘momentary glitch’, by one airport with backup systems kicking in after a quarter of an hour but a large no of flights got delayed around the world.

One passenger wrote: ‘If your entire system is down at REAGAN airport in DC, does that mean the planes aren’t leaving on time?’

ALSO READ: Obama: I cried when Malia went to college

Another added: ‘After 10 min of standing in a queue, the Lufthansa system in the whole Frankfurt airport stops working. Fun’

One tweeted from London: ‘When you’ve been looking forward to your holiday all year and then all computers at airport crash as you are checking in. ALL SERVERS DOWN’

Heathrow’s departures board showed nearly all planes took off half an hour and an hour late this morning, with some flights scheduled for afternoon delayed by a similar amount of time.

A spokesman for the airport said: ‘A small number of airlines are currently experiencing intermittent issues with their check-in systems at airports around the world – including at Heathrow.

‘Passengers will still be able to check-in for their flight, although the process may take slightly longer than usual.

‘We are working closely with our airlines to help resolve the issue as quickly as possible. We apologise for any inconvenience this may cause.’