The festival of lights, Diwali has started to lighten up mainstream America. Diwali, a festival of lights, has always been observed in immigrant Indian communities around the U.S. But now public celebrations of the holiday are starting to begin in places ranging from Disneyland and Times Square to parks and museum.

Neeta Bhasin, who is the brain child of the event at Times Square says that while many Indian immigrants have found great success in the U.S., “still people don’t know much about India. I felt it’s about time that we should take India to mainstream America and showcase India’s rich culture, heritage, arts and diversity to the world. And I couldn’t find a better place than the center of the universe: Times Square.”

Bhasin, who has been living in the United States for 40 years now, is president of ASB Communications, the marketing firm behind Diwali at Times Square. The event, now in its fourth year, has drawn tens of thousands of people in the past. It’s scheduled for Oct. 7, from 2 p.m. to 9 p.m., with dance performances, Bollywood singers, a bazaar of food, saris and other goods, and a lighting ceremony.

While Diwali celebrations are held throughout the fall, the holiday’s actual date is Oct. 19. Also called Deepavali, it’s an autumn harvest festival held just before the Hindu new year. Celebrations include lighting oil lamps or candles called diyas to symbolize “a victory of knowledge over ignorance, light over darkness, good over evil,” said Bhasin. 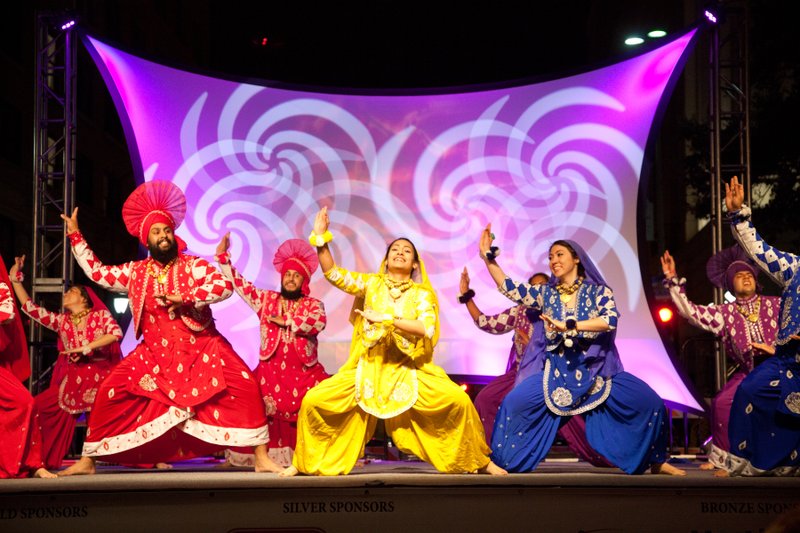 The Diwali celebration at Disney California Adventure Park in Anaheim, California,has traditional Indian dances and a Bollywood dance party for guests. It’s part of a festival of holidays at the theme park reflecting cultural traditions from around the world. The Disney festival begins Nov. 10 and runs through Jan. 7.

San Antonio, Texas, has one of the nation’s largest city-sponsored celebrations of Diwali, drawing more than 15,000 people each year. The 2017 event, scheduled for Nov. 4 at La Villita, a historic arts village, will be its ninth annual Diwali celebration with Indian dance, entertainment, food, crafts, fireworks and the release of lighted candles into the San Antonio River along the city’s River Walk.

Bhasin said Diwali’s message is particularly timely now. “It is extremely important to be together and showcase to the world, not only Indians, but the entire immigrant community, to be together with Americans and to show the world we are one, we are all the same human beings,” she said.

With inputs from Republic.