New York: Pakistan’s Ambassador to the United Nations Maleeha Lodhi in her right to reply to External Affairs Minister Sushma Swaraj’s speech at the UN showed pictures of Palestinian victims and tried to pass them off as ‘evidence’ of atrocities on Kashmiris.

Maleeha Lodhi resorted to waving dramatic pictures of a girl with pellet injuries on her face and added, “this was the face of Indian democracy”, while suggesting that Kashmiris had been injured by pellet guns.

ALSO READ: ‘Inevitable’ that our missiles will hit US mainland: North Korea FM

However, upon closer inspection of the picture, Maleeha Lodhi’s claim seemed to have boomeranged on her. 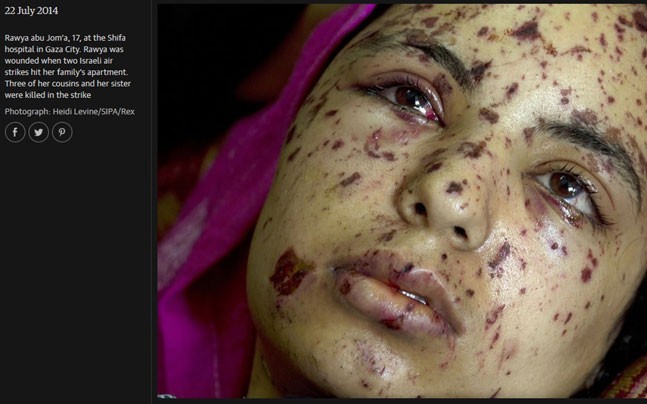 The picture used by Pakistan’s Ambassador to the UN was reported by a number of media outlets as that of Rawia Abu Joma’a, a 17-year-old girl injured in Israeli airstrikes on Gaza city in 2014. Rawia’s picture was taken by award-winning photographer Heidi Levine.

Earlier on Saturday, Swaraj had said India has risen despite being the principal destination of Pakistan’s nefarious export of terrorism.

ALSO READ: Sushma Swaraj’s address to the UN General Assembly: All you need to know

“India has risen despite being the principal destination of Pakistan’s nefarious export of terrorism. There have been many governments under many parties during 70 years of Indian freedom, for we have been a sustained democracy. Every government has done its bit for India’s development. We have marched ahead consistently without pause, in education, health and across the range of human welfare. We established scientific and technical institutions which are the pride of the world,” Swaraj said while addressing the 72nd UNGA session in New York.

She also questioned as to what has Pakistan offered to the world and to its own people apart from terrorism.