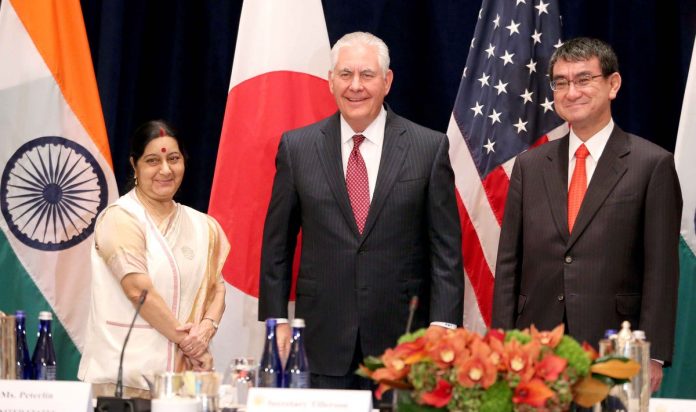 In the meeting, the leaders of three nations exchanged views on maritime security, connectivity and proliferation issues.

The ministers emphasised on the need for ensuring freedom of navigation, respect for international law and peaceful resolution of disputes.

They also discussed on connectivity initiatives, the importance of basing them on universally-recognised international norms, prudent financing and respect for sovereignity and territorial integrity was underlined.

On the North Korean nuclear crisis, Sushma Swaraj deplored their recent actions and stated that its proliferation linkages must be explored and those involved be held accountable.

Meanwhile, Sushma Swaraj will be taking part in a meeting, chaired by US President Donald Trump, to discuss terrorism, on the sidelines of the 72nd session of the United Nations General Assembly.

The initiatives are related to overall reforms of the U.N., including the Security Council reforms, which India has been asking for a long time to strengthen objective of the U.N. Charter.

Swaraj will also take up the issues of Pakistan-based Jaish-e-Mohammed (JeM) chief Masood Azhar, reforms in the U.N., climate change, and other peacekeeping issues in the United Nation General Assembly.

Earlier during Prime Minister Narendra Modi’s visit to the U.S. in June this year, he and Trump agreed to work together to resolve the increasing threat of terror.

“Both India and the U.S.A. are global engines of growth. Eliminating terrorism is among the topmost priorities for us,” Prime Minister Modi said, in a joint press statement at Rose Garden, White House at Washington DC.

The Indian foreign minister arrived in New York on September 17 for seven days of back-to-back engagements centring around the U.N. General Assembly, including her first meeting with U.S. Secretary of State Rex Tillerson.

Conclusively, Sushma Swaraj is set to have several bilateral meetings and multilateral commitments, apart from speaking at the U.N. general debate on September 23.