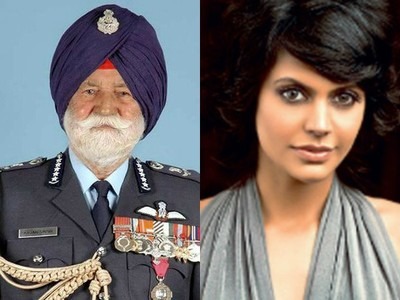 New Delhi [India]: “He was a great listener,” said actress Mandira Bedi, niece of Marshal of Indian Air Force (IAF) Arjan Singh, on Monday, while sharing her memories with the latter.

“My greatest memory of him was that he’s a great listener; he used to listen. He had so many achievements, but he never spoke about anyone. Rather what he would do is he will be interested in your life. So, he asked me the smallest things about my work, my son, my family and more,” she told media, after the last rights ceremony of the Marshal of IAF, here at Brar Square.

Mandira, who reached Delhi, early morning on Sunday, further stated, “He lived a very beautiful and distinguished life. The farewell that he got, the way the Air Force took it over, shows how well loved, admired and respected he always was, and rather he is. One looks back at the life so well lived…yes it is a loss.”

She also took to Twitter on September 16 to share her grief and posted, “Marshall of the Air Force, #ArjanSingh , my uncle, passed away this evening. A true officer and a gentleman. Will miss him dearly. #RIP”

Marshall of the Air Force, #ArjanSingh , my uncle, passed away this evening. A true officer and a gentleman. Will miss him dearly. 😞🙏🏼#RIP pic.twitter.com/Gw2R3s7blC

A fly-past of Sukhoi-30 fighters and a 17-gun salute for Marshal of the Indian Air Force Arjan Singh were held at his last rites ceremony at Delhi’s Brar Square on Monday.
Defence Minister Nirmala Sitharaman on Sunday stated that along with a state funeral and an appropriate gun salute, a fly-past may take place, depending on the weather conditions, to honour the contribution of the Marshal of the Indian Air Force.

The funeral ceremony of Arjan Singh took place in the national capital with tribute paid to the five-star rank Air Force officer with full state honours.

The national flag was flown at half-mast at all government buildings in Delhi today as a mark of tribute to Arjan Singh.

Arjan Singh’s body, wrapped in the flag, was taken from his home to the Delhi Cantonment in a gun carriage at the funeral site.

Defence Minister Nirmala Sitharaman, the chiefs of the Air Force, the Army and the Navy paid tribute at the last rites ceremony.

Prime Minister Narendra Modi on Sunday visited the residence of Arjan Singh to express his condolences to the family.

The whole nation mourned the death of India’s pride, who breathed his last on Saturday.

He was admitted to Army’s Research and Referral hospital on Saturday morning after he suffered a cardiac arrest.

In praise of Arjan Singh, defence experts said that very few can equal him in stature and his contribution to the cause of the defence force as well as the country.