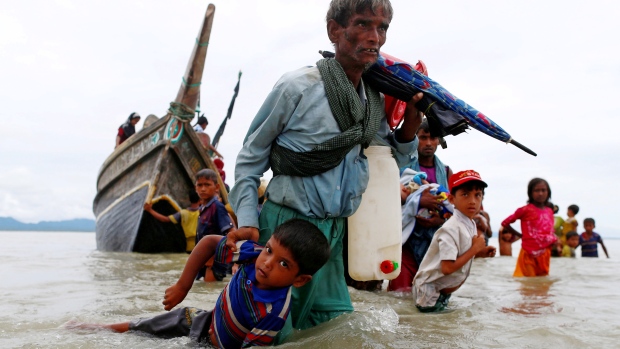 New Delhi: The Centre on Monday filed an affidavit in the Supreme Court on deportation of Rohingya Muslims from India and said that the illegal influx of the refugees will adversely affect the fundamental rights of Indian citizens and cause a threat to the national security.

The apex court had told the government to submit the affidavit after a plea was filed before it against the deportation of the illegal immigrants to Myanmar.

“In light of what is stated hereinabove, as the subject matter of the petition is not justiciable, as the fundamental rights of Indian citizens would be adversely effected, as there is serious national security threat or concern and when a just and fair procedure prescribed by law exists for deportation,” the Centre said, in the affidavit.

“India, as a sovereign nation, has the first and the foremost Constitutional duty and obligation towards its citizens to ensure that the demographic and social structure of the country is not changed to their detriment due to the influx of illegal immigrants into the territory of India,” the affidavit added.

Some Rohingyas are indulging in illegal and anti national activities such as mobilisation of funds through hundi or hawala channels, procurring fake or fabricated Indian identity documents for other Rohingyas and also indulging in human trafficking, the Centre added.

“Illegal influx of Rohingyas, in significant numbers, has started into the territory of India since 2012-13 and the Central Government has contemporaneous from security agencies inputs and other authentic material indicating linkages of some of the unauthorised Rohingya immigrants with Pakistan-based terror organisations and similar organisations operating in other countries,” the Centre said.

In its affidavit, the Centre also submitted that many of the Rohingyas figure in the suspected sinister designs of the ISIS and other extremist groups want to achieve their ulterior motives in India including that flaring up communal and sectarian violence in sensitive areas of the country.

“Stating that there are more than 40,000 Rohingyas in India, the Centre said that the illegal immigrants entered India from Myanmar using porous border between India and Myanmar.

Taking note of the Centre’s affidavit, the apex court has adjourned the hearing in the matter to October 3.