Los Angeles: The star-studded Emmys ceremony came to an end, with several stars setting records in the TV world.

On one hand, Lena Waithe broke down barriers, being the first black woman to win an Emmy for her writing in ‘Master of None,’ on the other, Julia Louis-Dreyfus won the best actress in a comedy series for the sixth time for ‘Veep.’

‘Saturday Night Live’ veteran Alec Baldwin won the award for Best Supporting Actor in a Comedy Series at the 2017 Emmys for his portrayal of President Donald Trump on the show.

On that note, host of the big night, Stephen Colbert, crushing US President Donald Trump’s obsession with Emmys, opened his monologue saying, “”There’s no way anyone could watch that much TV, other than the president. Hello sir, thank you for joining us. Looking forward to the tweets!” 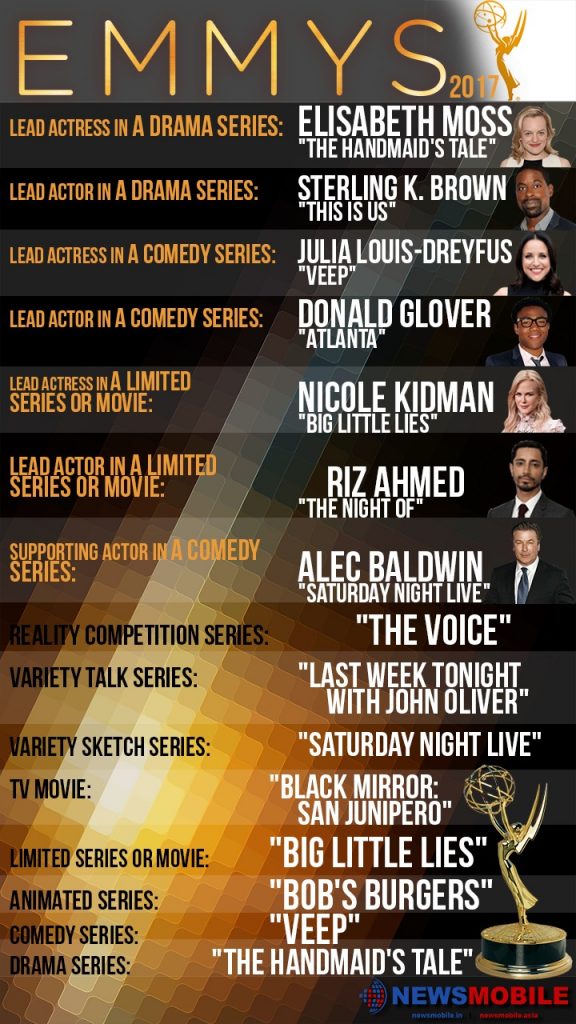 He admitted that the biggest star of the year, in fact, was Trump, reminding the audience and viewers at home of the former reality star’s obsession with the Emmys.

“However you feel about the president, you can’t deny that every show was influenced by Donald Trump in some way. We all know the Emmys mean a lot to Donald Trump because he was nominated multiple times for Celebrity Apprentice, but he never won. If he had won an Emmy I bet he wouldn’t have run for president,” noted Colbert.

Adding, “He added, “So in a way, this is all your fault, I thought you people loved morally compromised anti-heroes.”

– Supporting actor in a drama series: John Lithgow, “The Crown”

– Lead actor in a drama series: Sterling K. Brown, “This Is Us”

– Lead actor in a limited series or movie: Riz Ahmed, “The Night Of”

– Directing for a Drama Series: Reed Morano, “The Handmaid’s Tale”

– Guest Actor in a Drama Series: Gerald McRaney, “This Is Us” – “The Big Day”

– Writing for a Drama Series: Bruce Miller “The Handmaid’s Tale”

– Writing for a Comedy Series: Aziz Ansari and Lena Waithe “Master of None”