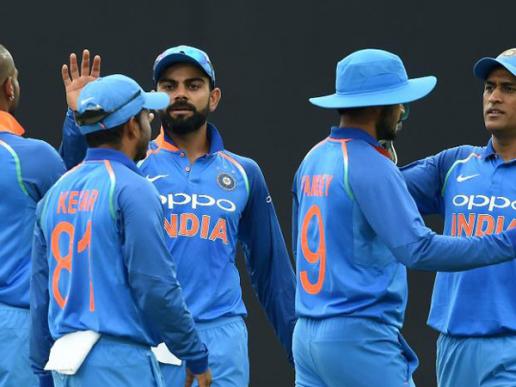 Mahendra Singh Dhoni and Hardik Pandya shared a crucial century-run partnership to help India post a decent target of 282 runs for Australia in the opening ODI of the five-match series here at the MA Chidambaram Stadium on Sunday.

Opting to bat first, India made what could be termed as the worst start to their innings, losing their first three wickets of just 11 runs.

Though opener Rohit Shrama (28) and Kedar Jadhav (40) tried to find their feet slowly, it seemed that the pitch was assisting the Australian pacers.

However, India rode on contrasting half centuries from all-rounder Pandya (83) and former skipper Dhoni (79) to help India recover from a precarious 87-5 and post a score of 281-7 in their stipulated 50 overs against the Steve Smith-led side.

It was Pandya’s career-best ODI score, surpassing his previous best figures of 76, which he notched up against Pakistan in the finals of the ICC Champions Trophy final in England earlier this year.

Meanwhile, Dhoni, who also struck four boundaries and two sixes in his 75-ball knock, also forged another healthy 72-run seventh wicket stand with Bhuvneshwar Kumar (unbeaten at 32) after the loss of Pandya.

For Australia, pacer Nathan Coulter-Nile was the pick of the bowlers as he claimed the wickets of opener Ajinkya Rahane (five), and skipper Virat Kohli and Manish Pandey (both for noughts).

James Faulkner and Adam Zampa also chipped in with a wicket each.

India entered this series after having swept Sri Lanka across formats recently, and the team is gradually becoming a ruthless unit with players for every condition and situation.

Australia, on the other hand, have returned to India for the first time since their fiery and controversial Border-Gavaskar series earlier this year, which India won 2-1 and which ended with Kohli declaring some of his friendships with the Australian players had been irreparably damaged.